OKie-engineering in attempt to salvage a guitar. Part 1 Inside clean up

I just wanted to share a Frankenstein experiment that I have been conducting. I have a Breedlove Passport concert guitar. It’s back has pulled away from the binding in two places, above the endpin and on one side.

The poor guitar received a very poor prognosis from a repair tech at Breedlove and a luthier at a local guitar shop. Calling its family and making plans for last rites were recommended. A 2-way humidifier had a catastrophic failure and spilled all its little crystals in the guitar body. During this time I was recovering from a total knee replacement and unable to get to the room with the guitar. Meanwhile, the crystals were swelling, the guitar was getting damp where the crystals were …and “Pop” goes the back.

I decided today that if it was a goner, that I didn’t have anything to lose if I tried to fix it myself. I’d just have to apply some Okie-engineering. This is what folks do out in the western US in rural Oklahoma. You use baling wire, duct tape, butter knives… what ever you have on hand and get things running.

Progress thus far:
So I’ve spent about 6 hours on the guitar today. As I sign off, the two areas of the back that lifted away from the binding have set back down. I can see inside that where the wood looked wet that it is drying out. There is a dark water mark on the back of the guitar that has lightened a tad, but I am not hopeful that that will go away. I don’t want to mess with the finish, so this may be a signature design feature of this guitar going forward.

Next Steps
I’m going to need to keep watching to see how things are drying and keeping tabs on humidity.
I am going to need some spool clamps and titebond original to reattach the two spots of the back that lifted.

I came up with a plan on how to make my own Spool Clamps. These are clamps that you use around the outside edge to clamp a top or a bottom onto the sides of the guitar. If this works I may be able to make about 25 clamps for about $50 dollars. I think Stew Mac sells 5 for $39. As soon as the parts arrive, I will post a Okie-engineering Part 2 on How to make spool clamps.

Oh, I also bruised my forearm from reaching though the sound hole. price we pay.

Have a good night,
Rose
PS Community and @Silvia, let me know if you have any suggestions.

Wow, consider me interested!
Good thing the parts that lifted are settling down again. Do you think you’ll need to do more structural work apart from glueing and clamping them again?

Fascinating. Would love to see before and after pictures

Pictures or it didn’t happen!

I’m looking forward to following your project. You’ve written it in an informative but also amusing way.
I’m a farmer and the ‘make do and mend’ attitude has always been with me. Bale twine has got me out of many a tricky situation!
I wouldn’t recommend it for holding your guitar together though. Although you could try……no, best to use the clamps!

Hi Rose, I’m afraid I can’t give any technical advice as I’m not familiar with the inner anatomy of guitars, but being myself a lover of lost causes, when they’re really lost, I’m now crossing all my fingers for “the creature” to come back to life. Let us know how it goes, also with some pictures. Good luck!

Great project! If nothing cracked, I bet you get your guitar back. Like your arm, it may have noticeable bruises, but it will be even more attached to you at the end! A worthwhile save.

I love stuff like this. I saved a K. Yiari CY-140 classical. Looks rough but a great beater to take out and plays just fine. It is about the sound and playability, after all.

Hi Rose,
For the love of the guitargods…
pictures I want to see many pictures

and i wait patiently…

Pictures or it didn’t happen!

@TheCluelessLuthier Mark may be able to offer advice on clamping ?

Sounds like an interesting project Rose, just make sure you can playing while rebuilding.

Incoming… Pictures Before:
@LievenDV , @roger_holland , @TheMadman_tobyjenner , @SILVIA feast your eyes on this mess! e big junk was already scoped at this point. 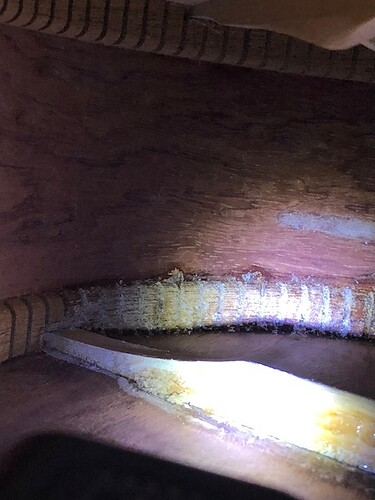 Inside1-Crystals480×640 74 KB
This shows crystals caking and filing grooves and piled in front of the brace. Melted crystal goo filling behind that brace. 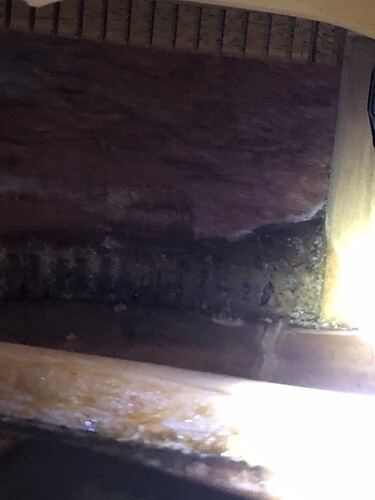 Inside2-Crystals480×640 48.2 KB
This second image shows major caking of crystals and goo. This is under and to the left of the endpin. This acoustic has a pickup and tuner and the does not seem to be any damage there.

Standby for some after shots.

Our farmers and ranchers are having a tough go at it right now. Drought. Just hate it. used to run a few cattle. So glad we have been out of that business, I would hate to have to get rid of herd because of water/feed issues. I saw the peanut crop is down 2/3rds. Better get your Jiffy stocked up while you can.

Baling wire /twine. We could probably coauthor a book on 101 uses!
@BurnsRhythm I just posted some before pictures. Going to load some progress pics shortly.

I know, that is some scary looking bad words.

Aaron, there does not appear to be any other issues. Before I started the repair, the sound was good, the tuner was working. The neck and the action were good. I did not plug it into an amp … because me + water+ electricity is something I avoid as that was how I was electrocuted. Once its all dry , and finished with the glue/clamp, I’ll test that. But if that is fried, it did sound good without an amp.

Here are the tools I used. Not pictured are the long forceps that I used to attach paper towels to for mop up operations. The guitar neck is resting on a tailors press. I sew and it was handy.
Wooden BBQ skewers, sculpting tools, and a silicon brush. I wish a had a little teenie wire brush. 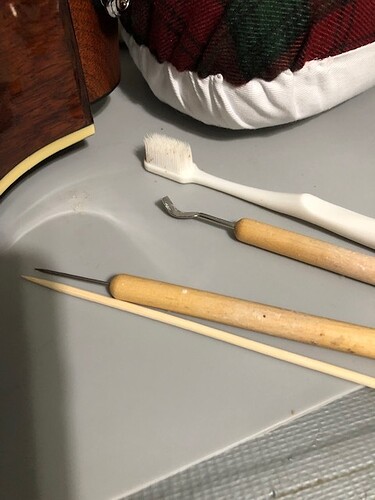 Here is how it is progressing: First look at all the grooves cleaned out on this side. It is drying out nicely too. What a difference. I can still see some crystals in a groove by the end of the brace that I will work on. 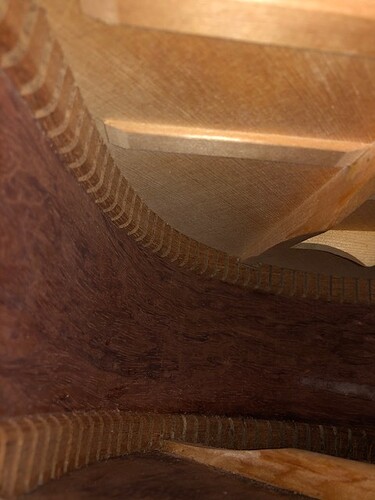 Now here is the inside by the endpin. It is much improved and I am going to work on this some more today. Now the area in front of this brace has some lifted wood slivers. However, it is not as bad as the image makes it appear. There are white water stains that are creating an illusion here. I can see what looks like a bit of crystal at the bottom of that endpin. 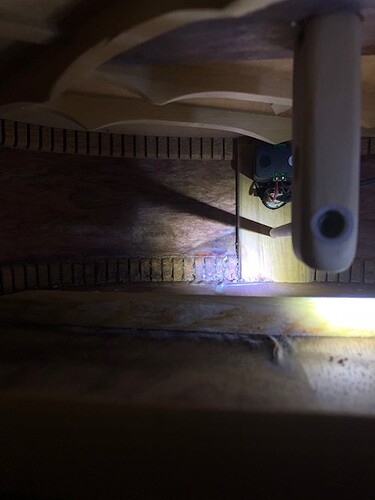 Here are the areas that lifted on the back of the guitar. That have significantly laid down. First is on the side. 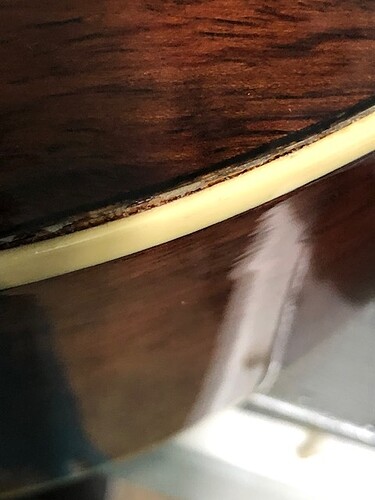 This is the lift on the back to the left of the endpin. The finish appears milky in this picture, but it is not. It is the lighting. 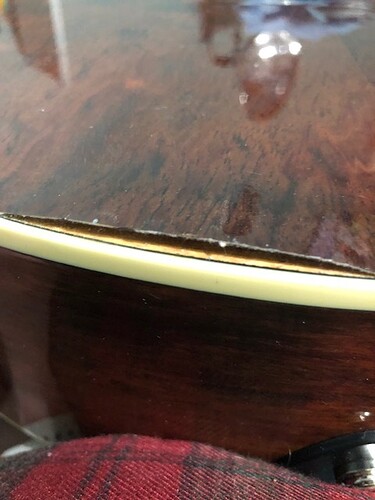 Ok, that is all for show and tell for now. I’m going to work on the area by the end pin to see if I can get any more of those crystals out.

I haven’t done many repairs and nothing like this. It also sounds like you have done a bit of research. The first recommendation I would make, if you are on Facebook, is to join a group called Amateur Acoustic Luthier. I have asked a number of questions in that group and the response is amazing. I would also be interested in seeing a picture of the outside of the guitar where the back is pulling away. I am wondering how much has separated. If there is a large amount it might be worth taking the back off. You can do that with some heat. It would make repairing the inside much easier and you could do a better job. I will be following to see how it goes. It sounds like an adventure!

Ok, and I just saw the picture of the back.

It is hard to tell for sure, but is that just a layer of veneer pulling up or the entire back? If it is veneer then I thing you just want to glue it down. You would also want to use something as a caul, maybe a thinner piece of wood with wax paper between to avoid it getting stuck. The spindles alone would not be able to spread the pressure sufficiently.

Thanks so much for checking on me, @TheCluelessLuthier. I appreciate the info on the Amateur Acoustic Luthier group. The back laminate bubinga. The lift is not with the entire top. I cab stick a very thin need into the opening and can feel that there is a layer underneath and a point at which the uplifted section is connecting to a sub layer. Thank you for the recommendation on the caul. I want thinking about spreading the pressure and had not worked that out. So that was extremely helpful.
I’ll post and update once I get to gluing and pressing.

Cool ,thanks for sharing these pictures.
That’s a handful!