So last weekend we performed at the “Tewksbury Big Weekend” . It’s a big event spread out all over town and this was the first time they’d really had any live music.

It’s a town fete/festival and it was “happens chance” we got the slot. We’re friends with another band and they just couldn’t do it so put us forward. On the strength of our Open Mic performances we got it. It wasn’t a paid gig so to be honest I think the organisers were happy at relatively late notice to get someone. It was slightly odd in terms of staging as were down by the river and everything was on an island of land so quite linear.

From our perspective it was great opportunity to play an hour of music and to be honest it felt like the most consistent and confident set we’ve done. There are always little mistakes but nothing the audience noticed. The organisers were really happy and we got some great feedback from people watching.

Here are some highlights from the show. 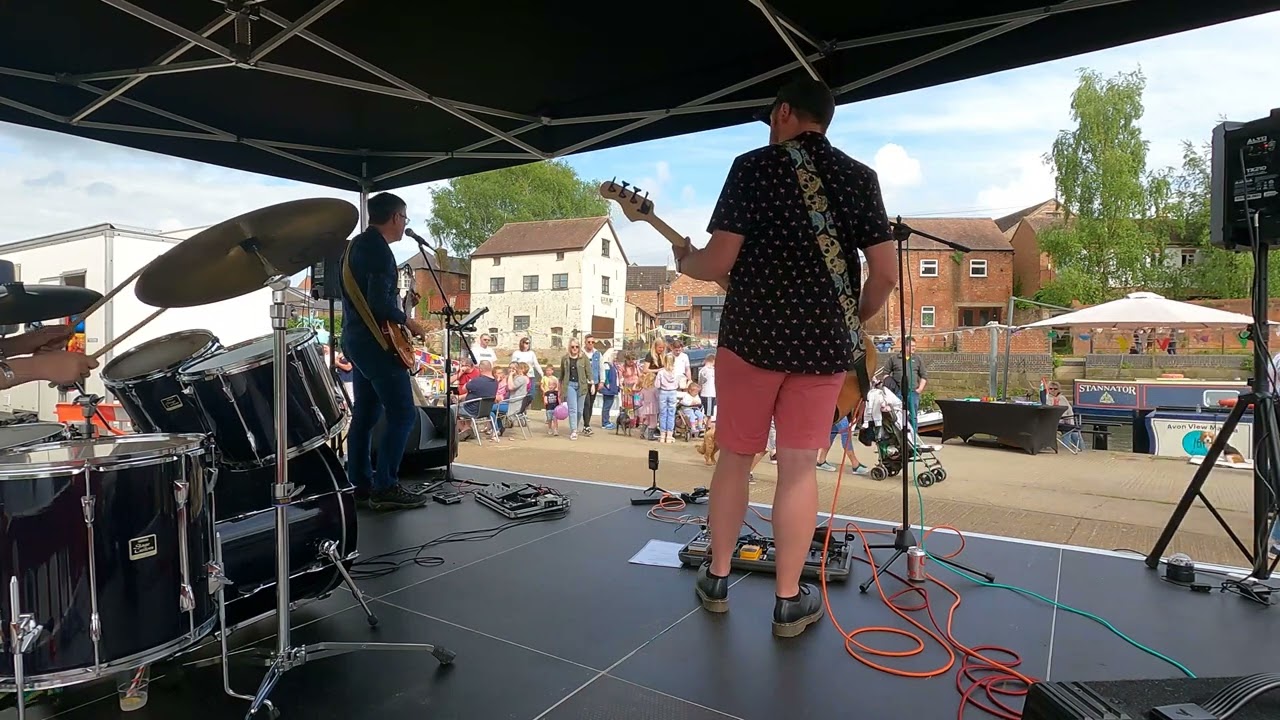 Just watching and listening now Jason.
A one-hour set from which you came away feeling satisfied is a BIG DEAL.
Bravo and well done to you and the band.

How very rewarding and satisfying for you and the band Jason.

That was great @Rossco01. Looked like you guys were having a great time. Sounded good.

I see the houses in the background and to me it looks like watching a British TV show or a documentary. Houses over here look so different!

Looks like a fun time for you and the band, awesome that you had a great set.

You guys just go from strength to strength, Jason, wonderful to see and enjoy. Memorable milestone to play a gig like that. Well done.

Wow! Congratulations! That must have fun!

Sounded great Jason. Wow an hour on stage, wonderful experience and exposure. Well done to the three of you !!!

Thanks all for taking a listen and I appreciate the kind words. I think the nice thing about this was that an hour didn’t feel hard and we had some more songs in the bank if we needed them. We were so much more relaxed than we may have been 6 months ago and that makes it a lot more fun.

For those who want to see the extended FULL set then it’s also on YT and includes all the bloopers as well lol. There is no such thing as playing a full hour without a few mistakes along the way. 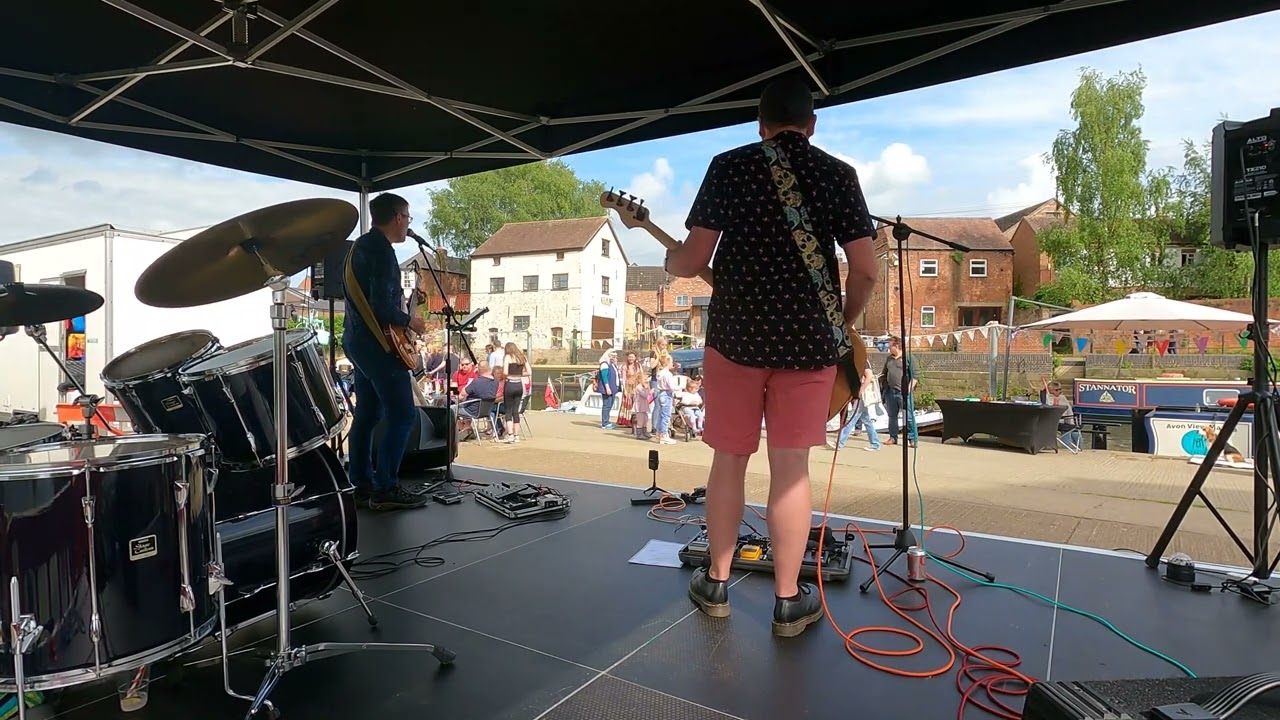 Sounded great. It must have been a great experience, hopefully it will open a few doors for you.

Great stuff. This must have been so much fun, I wish I had the opportunity and confidence to do something like this. Well done

Hey Eric it’s great fun but don’t think you can’t get there. We didn’t do our first real open mic until last July. That was the first time I’d sung and played live.

Keep practicing, contributing to AVOYP and the virtual OM they are a great basis for playing live. Also attend some OM as a member of the audience you’ll see many people the same as you.

Hi Jason that was great stuff and well done guys on getting a gig! Thank God you haven’t been flooded as Tewkesbury from what I recall in my short adventure living in Gloucestershire was infamous with flooding and once even kicking off the whole substation killing power to quite a large area nearby!

Plenty bystanders there passing by and enjoying your music, that’s great! Loved the lady during All Right Now and Why Does It Always Rain On Me - dancing around, they clearly got your vibe and enjoyed the show!

What did the lady around 50:45 say? From your reaction I reckon some odd request perhaps?

Speaking of ARN and perhaps during Born to be Wild - I think the tone of yours for those songs could have been a tad fatter and/or louder, that’s my personal view. And hopefully next time we will get the solo from you!

Your vox is getting stronger as well some good high notes there!

My favourites from your set were All Right Now, Bad Moon Rising and Never Tear Us Apart - all of those because of you I now need to learn how to play

All the best Jason and keep on rocking you guys are doing fantastic!

Edit. Oh and BTW my wife said that your voice would suit nicely with this song if that’s sort of thing you perhaps know or enjoy

it’s called Lost Weekend by Lloyd Cole And The Commotions.

I enjoyed the highlights video and will have a look / listen to the full set. I always like your song choices and as other’s have said - sounding really good as a band!

Must be lots of fun and really satisfying (after a lot of hard work and practice…!)

I’ve only watched the highlights so far Jason but that was excellent. You guys are really sounding great and what an excellent confidence booster playing at a festival. I hope some great things come from it.

Do you ever play acoustic at any of your sets?

You picked the right two words, Eric. After your performance at the OM we all know you have the competence.

Lost Weekend by Lloyd Cole And The Commotions

That jogs my memory, Adrian. This was my favourite: Lloyd Cole And The Commotions - Rattlesnakes - YouTube

Thanks Adi for listening and the feedback. That lady was the wife of a friend of ours. She was asking how many songs we had left and could we dedicate one to her son.

In terms of tone that is difficult to judge from the video. You might have noticed we had a recorder at the front of the stage. The aim was to get a better audio recording then blend it with the camera one BUT unfortunately someone (me) forgot to start it. So you’re getting the drums and the bass (as there was a bass amp on stage) into the camera and all you get from is what bounces back from out front. We had a couple of guys doing the PA who were checking the levels out front and as I was wireless I could step out front as well. All sounded pretty good there.

The question of solo’s is an interesting one and one we’ve mused a number of times. As it stands we’ve focussed on getting quantity of songs ready so we’ve got enough for 2x45 min sets. That comes at the expense of some of the bells and whistles on some songs. We have the intention to go back and improve those songs. Whether I can really do rhythm, sing and solo at the same time I’m not sure. Logic would say we add in a lead guitarist. We’re reluctant to do that at that this point as the bigger the band the more complicated it is. I think for songs where I can move easily and there is time/space to move from rhythm and singing to solo and back we’ll have a go…just need to find the time to a) learn the solos to a good enough standard and then see if we can get it all to work.

Say thanks to your good wife! I’ll look that one up.