Wasn’t sure whether to start another thread but will do so for now and then we can always consolidate. So another trip out for the band last night and despite the quality of the PA setup and sound it was a good night. Plenty of people watching and we did a solid performance. All the songs were relatively new with this being the first outing for our cover of Sunny Afternoon by the Kinks and only the second time we’ve played For Your Love (which some will remember from OM6) and Assassin our own song. We also performed Dignity by Deacon Blue and Don’t You Forget About me by Simple Minds.

A picture of the setup and some videos of the songs. 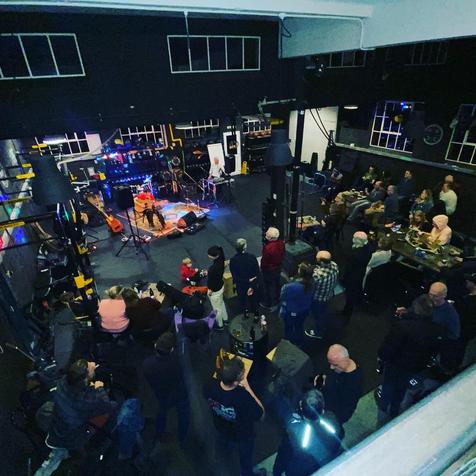 You guys are great value for an Open Mic, Jason, well done.

I thought Assassin had a very INXS feel to it that would be right in line with your influences/preferences I guess.

I notice that Stats For Nerds shows the videos 4-6dB over the YT norm. May be worth editing the videos before upload and pulling the volume down, though if the original recording was already overloading it may make little difference.

Great picture of the venue.

Thanks David and yes Assassin definitely has an INXS chord arrangement. To be honest I’ve no idea what he was doing with the sound last night but it overloaded both my camera and the other one we took…this is as good as it gets this time. To be honest I could hardly hear myself sing and that was despite him messing about with his monitors (which I don’t think is personally up to the job)… all part of the live learning experience you get at OMs.

Yeah we did have a “guest guitarist” they usually have a bit of jam at the end but there was no time last night so he joined us for our songs. He probably sounds best on Sunny Afternoon…he is extremely gifted being able to play whatever you throw at him.

Looked like fun! Makes me wish i had a band lol.

Thanks @TheMadman_tobyjenner yes it’s good to have the odd original…we’ve got another we need to work on and THEN I need to get my writing head on again. I find it very hard to shape things although at least I have quite a few ideas and snippets of lyrics now.

all part of the live learning experience you get at OMs

I performed on Thursday night last week, and stopped dead midway through the first line of the song, it just sounded so wrong. I think the vocal mic was turned up loud enough to throw me right off. Engineer dialed it back and all was well. That was the second event for the year, I manage one per month. No recordings so haven’t posted about them as to me without recordings not really news

ain’t that something, that an Open Mic performance is no longer something I rush home and immediately post about.

But enough about my OMs in your Gig Update

That is fine David I don’t mind at all. We do quite a few and we do tend to judge them based on how well they can set the sound up as it makes such a difference when you perform. I understand it can be challenging as you’ve got people with different kit switching in and out every 15 mins…but when you get it time after time it becomes a pain.

Great set Jason, you guys really are evolving and getting better with each session. 2 songs from the 60s was it a theme of this OM or just a coincidence?

all the best and keep doing what you have been doing you I enjoy your success!

Amazing Jason… you are really living the dream and getting better with each gig. Loved your original “Assassin”

Cheers Adi and thanks again for listening. Not a theme for this OM just that we’re building out that part of our set at the moment so need to practice them live. We seem to be getting quicker at learning songs which is good. I think it’s only taken us 3-4 practice sessions to get these two together.

Thanks Sandy and glad you enjoyed it.

Thanks Richard. Yeah it is an advantage that you keep getting pushed. I wasn’t convinced we could do Sunny Afternoon but we just about pulled it off.

Well done, Rossco01 and band. Did I hear audience singing along - especially on Sunny Afternoon? Which would prove they were thoroughly enjoying it. Good job on your original too!

Thank you Pam and yes you did. Sunny Afternoon was a very popular choice. Always feels great when people start to sing… you know you’re doing something right.

Always like the posts of people performing live. Enjoyed the set, the original was good, hopefully there will be more of them and a longer set. Must be a great feeling to get people singing along.