I have played guitar since I was a young. I remember the Christmas morning I was given my first guitar. I think my Mum has a photograph of me with it strapped on – I shall dig it out if I can. I have little recollection of playing it that much nor of what happened to it. It was a sunburst, small-bodied no-name cheapie. But the memory of knowing my parents bought it for me tells me I must have been asking for a guitar and expressed an interest way back when I was a wee boy.

I can’t remember how old I was either. I have a brother a little older than me but close enough in age that many of our Christmas presents were the same. We were handed such presents together. His typical trick was to impress on me not to open it quickly and tell him what it was … whereupon he promptly ripped the wrapping off his and spoiled my surprise by shouting what it was. But the guitar … in my memory, it was the first time that my big, main present was very different from that of my brother. I had become a separate person being bought something personal in my own right.

Some friends of my older siblings (I am youngest of five) played guitar and from them I learned my first chords and my first song. I remember clearly, and can still play, the chords of If I Were A Carpenter. Why that song? Who knows? Also, one of these friends gave me a collection of lyric and chord charts of songs. These had been printed on a Banda machine – does anybody remember those? – and I still have them to this day. See pics here.

The sunburst guitar was lost to me somehow, somewhere. Next came a black and white strat copy of some kind – again no doubt cheap and awkward to play. But I didn’t know better. It served a purpose for a few years. I eventually sold it to a college friend.

By the age of 14-15 I had been listening to a lot of punk rock and heavy metal. It was the time when the raw energy of The Sex Pistols and The Clash merged with the groundswell of the so-called new wave of British heavy metal - Iron Maiden, Saxon etc. I had long, long hair and was regularly going to gigs and headbanging my teenage head almost right off.

I needed an amp. I needed a volume knob.

And I vividly remember the day of buying it. It was going to be a Christmas present though purchased ahead of time. My Mum took me to Middlesbrough to a guitar shop so I could choose which I wanted. I chose a Carlsbro Hornet 30. Much like this. 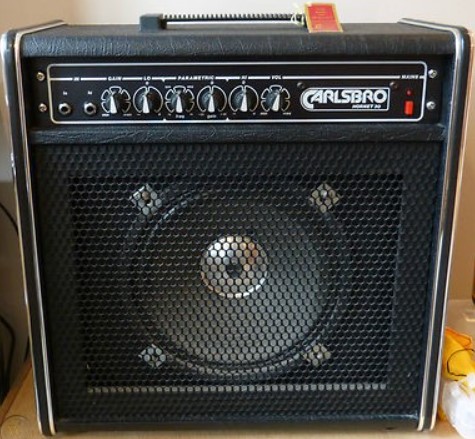 But it was the weirdest day to be in a guitar shop. It was Saturday December 9th 1980. The news had come through that John Lennon had been shot and killed. The atmosphere in the guitar shop was sombre and subdued to say the least. I was affected myself and the thought of turning an amp up and hitting some loud power chords would have been just plain wrong. So, my Mum bought it for me untested.

Sometime around this same time I got my first acoustic guitar from a shop in the unlikely locale of South Bank – Guitarzan Bongo Bill. It was set in a grimy steel town but was renowned far and wide for its collection of guitars and drums spread across multiple floors. This was my Yamaha FG-322. My friend for many years, sold about five years ago.

The strat copy moved on when I bought myself my first ‘proper’ guitar. I worked weekends and had been saving money for a new electric. I had a spell of being mad-keen on AC/DC and the SG look appealed. By the time I was able to make my own purchase I was heavily into Big Country and both their guitarists played Yamaha SGs. I could not afford a top-of-the-range model but got myself a gorgeous cherry red Yamaha SG400. It was my pride and joy. Again, I no longer have it as I made the unsentimental decision to sell it several years ago.

For a number of years, until I left home to go to university, I hung out with friends and we would listen to rock music and play our guitars together, thrashing away on some power chords, or trying our hand at some fancy acoustic picking stuff. I did work on teaching myself as best I could. I had several guitar music books that I tried to learn from and sheet music books too. I had songbooks for Bob Dylan, Neil Young, Rush (Hemispheres and A Farewell To King albums), The Beatles Complete (useless chords / tabs), Led Zeppelin Complete (mostly useless chords / tabs) and a few more. The best I got was approximating a number of rock songs with picked acoustic intros then full-on overdriven verse / chorus (examples being Children Of The Sea by Black Sabbath, parts of La Villa Strangiato by Rush and, of course, Stairway to Heaven by Led Zeppelin).

By the time I went to college (16-18) I was a moderate, beginner player. There were others far better than me for sure. They had enjoyed the privilege of having had a teacher for several years so their learning and progress left me behind. I reached a bit of a dead end with my electric playing as I had no way of unraveling the mysteries of playing like some of my guitar heroes and tearing up on killer lead solos.
I paid for about half a dozen lessons but it was the case of the wrong teacher for my needs. He was into fusion jazz and I wanted to play some heavy rock distortion noise. He killed off the enthusiasm in me by devoting lessons to complex and impractical theory and strange things called higher and lower appoggiaturas and other such useless nonsense. Look it up I dare you! haha. In time, after many years, as an adult, I went back to look at the notes I kept. And, actually, it was all really good information. But for 17-year-old me wanting to play rock and punk and loud with attitude it was anathema.

He also did work as a guitar tech. One lesson I took my Yamaha SG to him for a setup and he was so insulting and dismissive of it. This beautiful instrument that I had saved my money to buy, this guitar I had lusted after. He laughed at its low-brand status and when he set about doing some work on it he said, “I’ll do what I can but I can’t make a silk purse out of a sow’s ear”. I have never forgotten it, Never. And I never went back.

I never did learn how to play lead over the top of a song. And then I went off to university and had my first, very long hiatus from playing guitar with any regularity of purpose. I taught a college friend how to play and we would blast out plenty of Bob Dylan songs at stupid o’clock through the night but that was about it for several years.

Wow! I had a similar experience in a guitar shop. I went on the day John Entwistle (Bassist for the Who) died. I had tickets to see them in concert that summer. I remember the guy telling me, “You’re not gonna be seeing the Who.” While they did continue their tour, and I did see them, I guess he was right.

Probably not as shocking and wide-reaching news as the day Lennon died. But rockers certainly knew about Entwistle.

He also did work as a guitar tech. One lesson I took my Yamaha SG to him for a setup and he was so insulting and dismissive of it. This beautiful instrument that I had saved my money to buy, this guitar I had lusted after. He laughed at its low-brand status and when he set about doing some work on it he said, “I’ll do what I can but I can’t make a silk purse out of a sow’s ear”. I have never forgotten it, Never. And I never went back.

Yep, I’m a believer that people should get the best guitar they can afford because it can be inspiring to play even if it means spending $1k plus.

But also realize that $200-$300 can be a huge amount for some people. Especially younger people. So I don’t judge guitar choices. I just tell them to make sure the action is good so it’s playable. See if the shop will set it up complimentary. My first guitar was a Takamine acoustic under $200. Then I upgraded a few months later to a $300 Ibanez AW. The guy who sold it to me looked at me before I left and I said, “You have a nice guitar, man.” Really loved that guitar for a while. Solid top. Cool design.

Richard, loving this LL, learning a little more as to how you become the musician you are today.

I have never forgotten it, Never. And I never went back.

Community etiquette prevents me saying what I want to say

Hey this a great read, its like a novel I don’t want to put down. Next instalment please kind sir !

Great to read your LL Richard and looking forward to more.

I really enjoyed all the entries apart from this horrible guy who was moaning about your guitar - not everybody borns with momey in their pockets and those comments defo don’t help!

I have never forgotten it, Never. And I never went back.

Enjoying your story. Hearing about you never forgetting it, and never going back reminds me of a saying that people never forget how you make them feel.

If I Were A Carpenter

OMG!!! Les jeux sont faits. Rien va plus!
It was Richard all along… hidden in plain view!

(I can even hear birds suddenly appearing as I type…)

DCI Larsen on the beat.

These are some interesting stories indeed. Fortunately, I haven’t had a bad experience with music stores/luthiers yet.

I looked up what appoggiatura means and this came up: 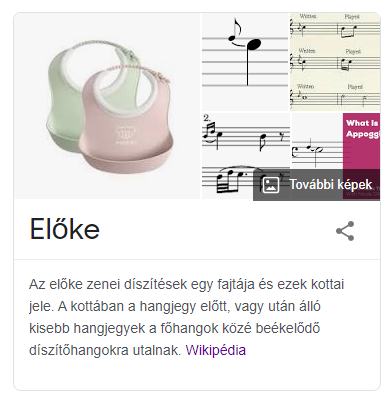 The wonders of homonyms and translating foreign terminology

I looked up what appoggiatura means and this came up

I don’t know about the baby food catchers, there are at least some music notations in shot too! haha

In Hungarian both the food catcher and the musical term are called “előke”, apparently. I’ve only been familiar with the first meaning so far.

What a great read - except the rude guy in the guitar shop (I restrained myself from choosing another word). Nice to hear your background, Richard. I’ve never heard of a Banda machine, but many of those early song choices were also on my playlist.

Thanks @Mari63 … it wasn’t in a shop. He was my (short-lived) teacher. The lessons were at his home and he did the work during one of my lessons. I had a weekend job and had to work two full Saturdays to earn enough money for each one of those lessons.

They were quite something.

What a treasure trove of musical richness and a source of fascination Richard. I suspect that some of what has shaped you as a man, a teacher and a musician informs and influences the generosity, warmth and empathy you share with us here as you guide and encourage us.

Thankyou for sharing the beginnings of your story.

appoggiatura, (from Italian appoggiare, “to lean”), in music, an ornamental note of long or short duration that temporarily displaces, and subsequently resolves into, a main note, usually by stepwise motion.

They were quite something.

The word ‘roneo’ was tumbling around since you mentioned ‘Banda’, until I could take it no more