Learn to play Stairway To Heaven [1/6] by Led Zeppelin on JustinGuitar!

Am I the only one that noticed this? 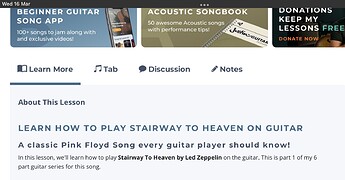 Thanks for giving me a chuckle and for the alert.
All is well with the world again now.

Fortunately, we can sleep again…or not??? back in the day when I chatted with @batwoman Maggie under Stairway’s video…Do you remember Maggie ?I often think about that promise I said that if I had a year of class here I’d post a video with the beginning of this song and I also said that if you’re the first 2 lessons passed well, the rest was quite doable…well just tried it…let me say…I’ll have to practice for a while

Yes @roger_holland Rogier, I remember our chat. I have no doubt at all that you’ll be dazzling us with a recording. I didn’t go any further, so what I learned is languishing in an unused storeroom in my brain. Out of curiosity I may pick up my guitar and see what I remember.

so what I learned is languishing in an unused storeroom in my brain.

I’m completely stumped with this. When I make the exact same movement with the right hand as Justin is, it makes different notes:

The forth and third strings (the ones that I am actually touching), sound right. But when I play the second sting with no fingers on it, it just makes the G note. And the first string makes the E note. I am so confused because every other song I’ve tried to play, I play the same notes that the videos tell me I am supposed to and play it right. I even watched another Youtube video on Stairway to Heaven and he said the exact same thing Justin said. Nobody else is having this problem. Is there something I am missing. I am SO confused but I don’t know if you can help me.

Is this a grade 1 riff

Almost ,but then grade 6

Hi Johny,
Can you tell me which barr it is? My head gets stuck on your question… It’s too hot in here to really get busy in my head… Greetings Rogier

What level (grade) are you in?

You say that the unfretted 2nd string plays a G for you. The open 2nd string is supposed to be a B. If you mean the A string, that’s the 5th string as strings are counted from thinnest to thickest.

First, you should make sure your guitar is properly tuned.

The only time you play open strings in there while playing intro is last section where you put your finger on 2nd fret A string and play simultaneously open G and B string (no open bottom e there), and then you jump over to A minor where you play strings A G B where A is only open string.

In which case going back to your original question it looks like your guitar is wrongly tuned. Also this is not a G1 song so this topic should be moved elsewhere or migrated with relevant song lesson.

Hi Adrian (@adi_mrok), not really looked at the video in much detail. The first chord looks like Justin is barring strings 1, 2 and 3 with first finger and fretting 4th string with 3rd finger (Am chord). Could it be OP is not barring the strings 1, 2 and 3?

What level (grade) are you in?

I’m Levi. I am a scratch beginner and I just started this course today (June 14,

I am not sure, let’s wait for further explanation as to which moment OP is asking about within the video

Oh! Sorry to inconvinience you all. I realized that Justin was talking about COVERING three strings. I didn’t know what that meant and assumed he just meant holding your finger on the third string. I just rewatched part of the video and a lightbulb went on, since I have spent a good deal of time trying to figure out what was up and have noticed that if I put my fingers on the first and second string it sounds like it is supposed to, so that makes since. Sorry about that!

@JohnnyBeGoode May I ask why you are learning Stairway to Heave if you just stated guitar on June 14? This is a grade 6 song and takes so hand dexterity and finger independence to get it to sound even close to being correct.
Good on you if you can pull it off but your most likely to just frustrate yourself.

The third automated welcome email sent me a link to a list of songs. And Stairway to Heaven 1/6 was one of the very first. I’m sure most of the song is quite complex. But the section of the song that video was about was fairly easy, though I was not aware of holding down multiple strings with one finger until then. So, maybe I am not supposed to be learning it.