I recall reading somewhere that you normally strum acoustic guitars over the soundhole, as the sound resonates best from this area.

In my most recent recording, @LBro pointed out that I was strumming up around the 17th fret and I might get a fuller sound if I moved down over the pickup area.
Initially this made a lot of sense, as that is what you’d do with an acoustic and it would seem natural to strum over the pickup. More importantly, he has much more experience than me and I am sure he is right.
My understanding of electric guitars is that the sound is purely a result of the metal string vibrating back and forth in a magnetic field (generated by the pickups, magnets wrapped in metal coils).
Now to make any string vibrate (with the same amount of strumming/picking force) the optimal point of contact should surely lie in the centre of the string (i.e. between nut and bridge).
If you strum an unplugged e-guitar indeed it is louder strumming in the centre, as opposed to either close to the nut or bridge.
My questions essentially are:

I am sure many good folks’ answer will be yes it does, but if anyone has a physical explanation (that I can understand, that’d be

Hey @brianlarsen, I will not match @Majik 's depth of knowledge, but I’m quicker off the mark

It does make a difference and the difference is in tone. The closer you get to the bridge, the more “twangy” it sounds. There is a physics reason for this. Whenever you pluck a string, it vibrates mostly at the fundamental frequency (i.e. the length of the string forms a single wavelength), but there are also vibrations at higher frequencies (double the fundamental, triple the fundamental, etc.) and these are known as overtones.

Plucking near the bridge increases the prominence of these overtones in the overall vibration of the string, leading to the more “twangy” sound (which just means more higher frequencies).

BTW, all this is true for acoustic guitars, too.

The early bird gets the worm, John.
Take your pick: lug-, rag- or ear-…

That makes perfect sense, and indeed fits in with what I hear.
However for most of my strumming on e-guitar, I’m usually looking for a full (acousticky) type sound, not a high-pitched twangy one. In which case, logic would suggest strumming in the middle of the strings (on the neck)?

Some of it may be dependant on the guitar type, model and what not. I would pin this one on the ears mano… Plug in a good set of cans and strum in differing spots to hear the differences.

Also - I would not say to strum at the bridge. I was thinking more down by the bottom of the neck and over the pups…

Another consideration is your palm muting. I think you might find it easier to mute with the palm down lower towards the bridge?

So … and my deficiency now also comes in handy, and now I have a nice story when someone points it out to me … (not that I really realized it, but I tell that of course not )…
Thanks for the question…

However for most of my strumming on e-guitar, I’m usually looking for a full (acousticky) type sound, not a high-pitched twangy one.

Well, it only gets quite twangy when you get very close to the bridge. (I’ll be waiting on a telecaster-fueled chicken-pickin’ country version of McArthur Park.

Agree 100% with @LBro that you should experiment and find the position that gives you the sound you are looking for.

Check out Keef he’s frequently picking and strumming half way down the neck or at least around the 9th fret. And he’s not a bad playa apparently !!

As LB says experiment and find your tone. Not something I have studied in my own playing but I generally think I am somewhere between Pups or over the mid Pup on the Strats. May now find out that is not the case at all.

Whatever you’re doing its sounding good to these old lugs

Happened to have an article pop up in my feed about Joe Satriani’s top 10 tips for guitarist where this topic was one of the 10.

“Years ago when watching footage of Hendrix, I noticed his picking hand didn’t stay in one place. Sometimes he’d pick at the bridge, while other times he’d move his hand toward the neck. It was a key element of his playing. Same with Keith Richards

“I started trying it myself, and it unlocked this rich world of tone.

“Learn to move your picking hand around. This will allow you to shape the tone of each phrase and individual notes. Also, change your pick angle and the part of the pick you use. You’ll be surprised how much variation in tone you can get.”

I am not sure which place is the best to strum around but it definitely has to do with string tension and not only frequency of vibration. I mean obviously tension and frequency are dependant but sometime ago someone came up with the idea that it sounds best bear the pup and clearly majority agrees with that

What sounds best to you, is more logical and/or more comfortable? I keep my pick/finger attack over a gap in the pickups because it’s closer to the bridge for easier palm muting and access to the guitar knobs and selector switches. In between the pickups allows me to “dig in” when I want to. Tone wise, I don’t see a need to add another variable like playing up the neck. I would rather adjust my pickup height to gather any sort of tone advantage, and not lose my proximity to the control knobs of the guitar.

Can’t add anything to the discussion Brian, but thanks for asking this interesting question.

Lads, you’re all very good to offer your 2 cents and I appreciate it.
As I suspected, there are a number of: yes, it does-
“Try it out.”
“Experiment.”

Anyone who’s seen me perform, knows I’m not a tone-chaser, and if I was, I’d just twiddle the knobs on my amp, buy a microphone or even use one of them Scarlett thingys.

I was simply curious about the basic physics of where the string is plucked on its effect in the pickup’s magnetic field.
Your points are all interesting, but I want to be like Thomas Dalby and blinded by science Science! We don’t do science here, only hearsay and opinions!

Where you strike a string depends on what harmonic overtones you get. A guitar string vibrating is not just one note, it’s also a series of other overtones at a quieter volume.

I’ll find a link later because I’m messaging on my phone about to run out the door… but it’s why you get different sounds depending on where you strike it.

Nothing to add to what has been said, but of course, your pickup selection also varies the sound you get depending on where you hit (if you have selected the neck pickup and hit close or not to the neck, etc)

A guitar string has a number of frequencies at which it will naturally vibrate. These natural frequencies are known as the harmonics of the guitar string. In this Lesson, the relationship between the strings length, the speed of vibrations within the...

If you strike right in the middle you emphasise the 2nd harmonic (the octave), 1/3 along emphasises 3rd harmonic, someone with better music theory can say the relation of that note, I only know it’s not the same note you’re striking.

Similar principles to how squealies work.

Never mind the science and the physics.
Keep it simple stupid.

I don’t have any knowledge on the physics of it, but the strumming position is definitely fun to play with. A couple of patterns that I think are nice and like to throw in sometimes:

I think the first one can work as a constant pattern for a whole song, the second one I like to use as more of an occasional feature. Particularly in songs that normally change chords twice per bar, but then occasionally hold out one chord for an entire bar, descending the neck with the strums on the full bar chord can sound really cool.

Ok,
You need to use good cans on this for optimal results! No laptop speakers or phones boys!

So I put together a short 1m 15sec video test on this. I tried as much as possible to be consistent on strumming so that the results are consistent. Idea being that variable it taken out of the equation. This is Blondie, which is a G & L ASAT Tele with Alnico pups. It is a very nice rig and is complete with locking tuners as well.

In this test I used no limiters or anything that would affect the sound levels. So ride your volume level if need be.

I added some notes as I went at the bottom of the screen. Take a good look as Bro does not show up on video that often… (CT take note) - lol

I think in Brian’s case he won’t get this dramatic amount of results. Using fingers to strum with tends to soften the differences in my book.

Here are the goods: I agree that the best approach is going to be to play and try it out.

Your points are all interesting, but I want to be like Thomas Dalby and blinded by science

Well, I think @jjw1 has given a great answer to this.

If you want to get more “Sciencey” than that, then you need to start digging into Fourier Series analysis, which starts getting complex quite quickly. A Fourier series, as the Wikipedia article states:

Basically, it’s a mathematical description of what @jjw1 said:

There’s a great article on this very subject here, but whether it actually helps you understand what’s going on or not may depend on your tolerance for mathematics. It does have some good animations though:

A conclusion from the article, is that the Fourier Series for a plucked string is:

with d being the pluck point on the string.

So, that explains it!

Or you could just have an experiment yourself to see what sounds you can get.

I will add that, I think (and I only have my own personal experience for this) that you also need to consider the “envelope” of the sound as this makes a big difference to how we perceive the sounds.

The “envelope” is the level of the sound as it develops from pluck to full release. In classic synthesisers, this is normally described using “ADSR” (Attack, Decay, Sustain, Release) which reflects how notes act on real non-synth instruments: 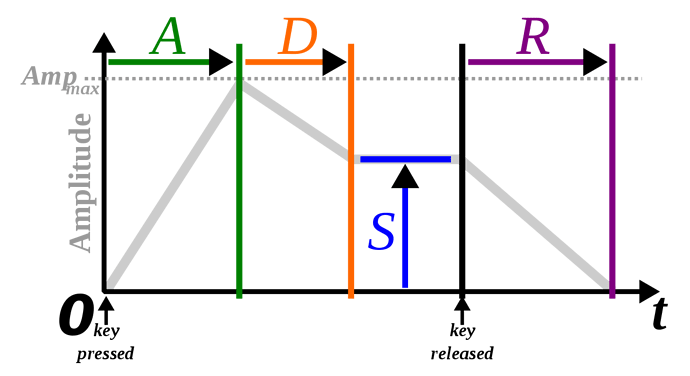 As shown in the diagram, typically there will be a spike in the level at the start of the note in many instruments (e.g. plucked strings, pianos, etc.)

If you pluck a note in different places on the guitar string, you will probably get a different envelope (as in a different shaped peak at the start compared to the sustain). This will also depend on how hard you pluck it. On top of the amplitude envelope, you are likely to get a different frequency envelope. For instance, plucking near the bridge may yield higher frequency harmonics for the attack part of the note, but these may even out during the sustain phase.