Hi,
Does anyone have any recommendations for tab play along sites? The free version of Chordify is great, but I want to slow it down which is paid feature. I don’t mind paying, but it’s a tenner a month and it’s a little steep for the amount I’d use it. Ultimate Guitar seems to fit the bill at around 40 dollars a year, but there are looooaaaads of really bad reviews - not of the tab itself but they make it impossible to cancel. Anyone any experience of Ultimate Guitar, or any other suggestions.
Cheers
Chris

I can’t tell anything about paid subs type of apps or sites but I really dig free youtube channels that do this sort of thing. And you can slow it down every 0.05 increment. I personally like Mr Tabs for more pro tabs but I am sure there are plenty like these for easier tabs depending what your level of play is.

I regularly use tab sites like ultimate guitar. Mostly I’m happy with what I find there, but there have been times where the chords listed were completely incorrect. To slow down songs I use apps on my pc, one is riffstation (which isn’t available anymore), the other is song surgeon which is very good in that I can also change the key, it costs about $100 or so from memory.

The free version of Ultimate Guitar is plenty for me to get chord charts or tabs. Then I use YouTube to get songs to play along with. You can slow them down on YouTube and they stay in the correct pitch.

Are you aware that Justin has tabs?
He would like at some point for that to become a rolling scrolling feature.

@Richard_close2u a rolling scroll feature would be great. My subscription renews in a couple of months and I will definitely be renewing, the Tabs feature is very helpful.

+1 for a rolling scroll feature for Justin’s tabs!

Thanks all for responses. YT is definitely an option and I do use it but I listen to some quite obscure stuff; i can find where there is a lesson maybe but not a play along thing with tab. UG and Chordify are good on the face of it, errors not withstanding, but I’m just not quick enough to play some of the stuff I want to and I need to slow it down. It isn’t a big part of my practice, it’s more for when I just want to jam along really. Chordify is very good and if they had a yearly subscription thing I’d go for it.

I did know that Justing did tabs, but it’s the scroll along thing I’m really looking for (which is same issue for using tab from UG then YT / slowing a song down using software)

What about guitar pro and pro files from Ultimateguitar? Wouldn’t this be good enough for you?

I had a look at Guitar Pro and it looks very powerful; certainly an option and I’d only be using a fraction of the functionality. Not that that’s a problem.

The issue is still with UG and the Pro tab, which I believe you have to subscribe to get. I don’t have a problem getting a subscription and actually, even as a standalone platform UG has exactly what I need. I’ve been tempted a couple of times but there are a plethora of terrible reviews e.g (but not limited to) Ultimate Guitar Reviews | Read Customer Service Reviews of www.ultimate-guitar.com

Reviews are bad not to do with the quality of the product but are a lot of people saying some shady practices around renewing, cancelling and taking extra money which makes me pretty wary. Has anyone here had good experiences with UG subscription?

To get pro files unless they are specifically made by UG team they are free to download. Head over to some done by users (won’t have red or green star on a side fro list of available tabs) and then scroll down towards comments section where in small font you will have Download pro file. If you struggle let me know I can do a quick snapshot of the screen.

Who do you need to download Pro file in UG? The embedded player can chose instruments, change speed and set looping, as well as transposing. Unless you want to edit the file, I have not seen the need to download the pro file.

I bought a lifetime license around 10 years ago for my son. Now he is not playing anymore, I take it back for myself. It cost me around $20-30 at that time (can’t remember exactly the price), and so far I don’t have any problem with them, even nobody was using the account for some years until I remembered it in 2020 when I started to learn guitar.

Ah right, cheers. I hadn’t realised; i thought user created tabs were free but the Pro tabs were Premium only.

That’s essentially the root of the problem. I’d happily pay to use the embedded player in UG, and it seems like it’s about that price nowadays for a year subscription which is fine, but there are a lot of complaints in reviews about the subscription practices

by just having Pro on right hand side of each tab listed doesn’t mean they are not free of charge.

I’ve just realised I don’t mean Chordify at all, I mean Songsterr - the free stuff is really good but the paid is quite expensive for what I need it for

I have a subscription to UG just for the Pro tabs. They seem, to my ears and my instructor’s, bang on. The feature where it plays the tab at different speeds, with a metronome, and shows the tabs for different instruments on the song are the features that made me sign up.

That doesn’t work for me Adi, so what I do is print the file and then in the print options there is an option to save to PDF, which then allows you to save the file.

I believe you might be doing something wrong then as it is working fine for me. Look at my little step by step printscreen guide below: 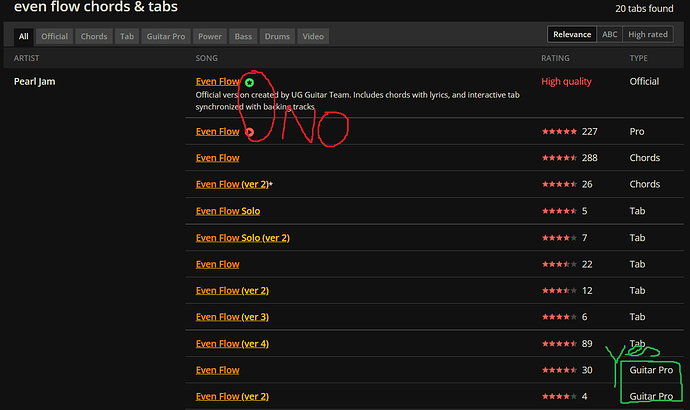 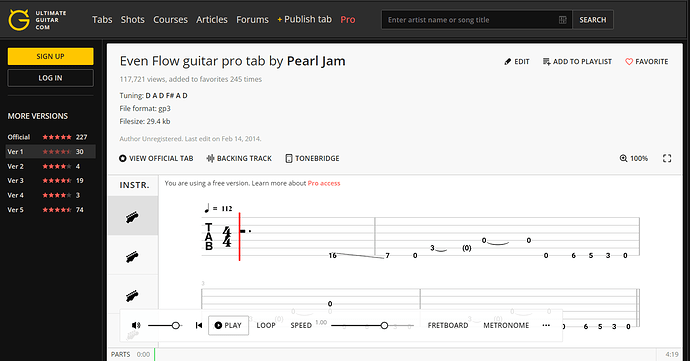 Step 3 that’s where it is hidden, scroll down just above comments section: 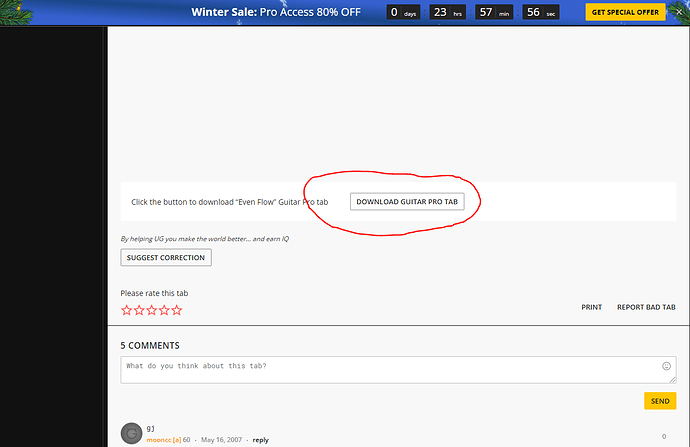 Thanks for that Adi. I was on a totally different thing and that is why I couldn’t do it.

I was just getting the chord songs from users and choosing “download as PDF” which would kick you over to the subscribe to UG bit. So by printing that you can save it as a PDF.

Do you know what do I do with this .gp3 file now that I’ve got it? Ahhh, it’s okay thanks. It’s for the guitar pro program.