The 6th interval on guitar is super useful and a fun tool to explore in a Blues guitar context!

View the full lesson at That 6th Trick | JustinGuitar

Loving these blues studies! Challenging but with this amazing tuition it inspires you to keep at it and see progress. Time well spent preparing these Justin! Thank you

This is the trick George Harrison used for his lead work on Dig A Pony.

Justin you truly are the best at what you do!! And that is guitar instruction with clear and concise explanation that makes it so enjoyable and satisfying as a dedicated learner of the guitar. Not to mention you’re also a pretty awesome guitar player yourself. I’ve tried so many different website tutorials with many different instructors but nobody even comes close to you! When I come back to you it’s like a breath of fresh air! I have improved my guitar playing and knowledge so much with your courses that I am your disciple! This particular blues series is very good and has allowed me to expand my blues playing repertoire greatly. Keep up the great work!!

Oh I’ve done it now! I skipped around and found this 6th trick far above my technical understanding @ grade 4 since it’s been many years before my retirement since I played regularly. Probably a dumb question from a redone beginner but presuming I can get past this lesson and some understanding of the interval aspect given, I noticed that at the end of the video when there’s that part where Justin gets creative to show possibilities I noticed in the lesson almost every pairing on the 1st & 3rd string is on the same fret. But as he runs down from the 12th as he’s noodling, that’s not the case very much, it’s more a 50/50 shot. So what’s the determining factor whether both strings, say 1&3 string are played on the same fret or not?

Hey @Lionhart40, I had exactly the same question and I think I’ve worked it out. The two notes played are a 6th interval apart (hence 6th Trick), in a particular major scale. So, for example, when playing over the E7 chord, you are playing the notes of E major. If you just play the scale on the high E string, the scale notes/frets would be:

Now, the note you want to pair with each of these is a 6th interval below, which you get from the E major scale. So, a 6th below E is G#. On the 3rd string, G# is 1st fret. Taking the 2nd note from the scale, F# played on high-E, fret 2, the 6th below that is A, 3rd string, 2nd fret. If you go through all the notes of the scale this way you end up with the E major scale harmonized with 6ths, using the following fret numbers for strings 3 and 1

It’s pretty complicated! Btw, this is for when playing over E. When you switch to the A or B chords, you change the scale you are playing and you have to work out the pattern for each key.

Disclaimer: I think this is correct, but if not, I would love one of the more knowledgeable folks to correct me.

My head may roll around and explode if I have to try and remember the sharps in every scale/chord in my retirement, especially while playing. It’s not something that will come naturally at all. Ugh… I bumped into this kind of thing noodling around with Wanted Dead or Alive. What was the question again? LOL Thanks! I had an uncomfortable feeling that’s what was going on. Now where can I find a bar?

OK, I’ve another question and you did great on the last one!
At the end of the video when he’s noodling around he does his 6ths thing but jumps from chord to chord 6ths with whatever he wants with no real pattern, but it all fits to my ear.
Is it that as long as you’re using the 1-4-5 chords to do that it will all work out and sound like it fits?

Anyone struggling to keep their picking hand middle finger from striking the in between string? For instance, we want the G# and the open E but not the open B. You can get away with it in my example but not in other pairings.

Not sure I understand your question and probably wouldn’t be able to answer if I did! Here’s a try, tho…

Actually, watching the video again, I see Justin mentions the Mixolydian scale, so when I say “major” above, it probably should be Mixolydian. This means the 7th note of scale is flattened, or D# → D. In that case, the 6th for the D note would be frets 11 - 10 (strings 3 and 1).

He mentions E, A, E, A back n forth when he starts with each until going off noodling farther up the neck which tells me he’s memorized far more than I could of the neck in my retirement age, which means no one will ever come to me for technical advice like this. LOL As you so aptly put it, he’s Justin. I was once told that a smart man knows what he doesn’t know, and that surely applies to me here! Thanks for your help, I really appreciate it. Leon

I will come back with something helpful that may be succinct or may end up being a whole treatise. Bear with me. Family times beckons.

Succinct answer - I have a long, long answer brewing in my mind and it is taking shape in written and diagrammatic form too. But see how you get on with this for now.

Here are the 6ths in the key of E major shown on the G and E strings plus the D and B strings.

There are just two ‘shapes’. Let’s call them diagonal and vertical. If you can visualise the diagonal shape having the root note on either the E string or the B string, you will have identified the sixths corresponding to the E major (tonic) chord. There is another sixth with the red dot, this time sitting within a vertical shape. These correspond to the relative minor C#m chord.

I will refrain from the theoretical underpinnings just here - for the sake of brevity.

The arrows underneath represent the fret spacing between notes showing lowest on screen. The R represents the corresponding position of a tonic chord (think CAGED shapes).

I hope that gives you a quick reference to be able to find 6ths in any key moving up or down the neck from any given root note.

Justin also plays some chromatic sixths. These tend to be played as a vertical shape almost exclusively between the two verticals just beyond the tonic position. Shown here as an additional sixth within a green box.

Later in the video, Justin does mention Mixolydian. It is not consistent with the main lesson content but it is certainly a useful add-on for playing sixths in a blues context. Because mixolydian contains a b7, which you may know is also found in the minor pentatonic scale, it can be described as a blues-tinged version of a major scale. The crucial difference between major scale sixths and mixolydian sixths is the b7 scale degree giving rise to a different arrangement / sequence of diagonal and vertical shapes.

There is still space to add a chromatic using a vertical shape just beyond the tonic position.

I hope that helps.
Cheers

First off, let me thank you for your time and efforts, they are greatly appreciated!
I’m going to presume that changing the chord also changes the relationship on the fretboard but the pattern repeats the same way?
If I wanted to do this for an A chord the 6th is F# so if I wanted to build a run down for that I could follow the same pattern by starting with the A on the g string/F# on the e string and go up the fretboard from there? Or am I off base.

@Richard_close2u awesome! Thanks a ton.

I’m going to presume that changing the chord also changes the relationship on the fretboard but the pattern repeats the same way?

If I wanted to do this for an A chord the 6th is F# so if I wanted to build a run down for that I could follow the same pattern by starting with the A on the g string/F# on the e string and go up the fretboard from there?

No, sorry, that is not correct. You are not looking for the 6th scale degree paired with the root. Perhaps I do need to write that longer explanation with some theoretical underpinning.

Look again at only these diagonal shapes which I will call the ‘tonic position’ for E.

The root note of E is on the E string or the B string. It is the highest pitched note out of the pair of notes. If you want to play the sixths based in the key of A then your diagonal shapes on the G and E strings would be at frets 5-6 and frets 17-18 respectively, on the D and B strings they would be at fret 10 - fret 11 with no other available on a standard guitar neck. The root note of A is at frets 5 and 17 of the E string and at fret 10 of the B string.

Of course there are sixths lower down the neck from these. They are just the positions on the fretboard where a complete pattern of shapes can be charted.

I’ve been trying to label the notes used for the major 6ths on the G & E strings but the arrows beneath that I think are indicating frets aren’t working out, I come up with 13 frets & odd notes. I’m trying to label them so I can sit down alone without life distractions so I can beat their relationship into my thick head. These are times I wish I didn’t stop playing and give up my lessons in my teens and then try to learn it in my retirement. Ugh…
I know this is simple basic stuff for you but can you list the notes on the 2 examples of the G& E strings and the D&B strings used in your diagrams? Thanks, Leon

can you list the notes on the 2 examples of the G& E strings and the D&B strings used in your diagrams? 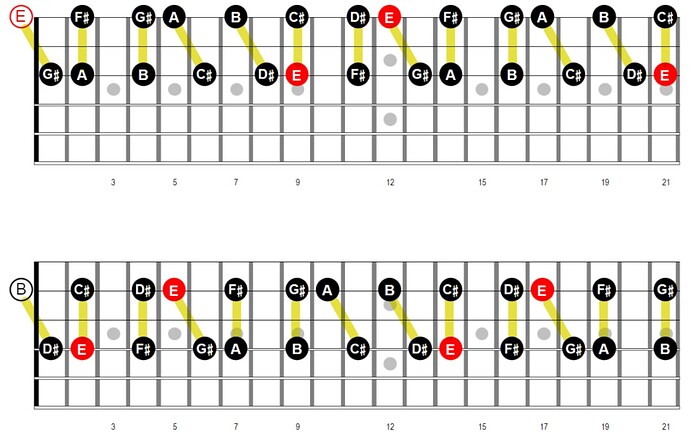 Put that neck diagram together with this next crucial piece of information to understand these sixths, these specific pairings.

Perhaps knowing that an interval of a sixth is either nine semitones (major sixth) or eight semitones (minor sixth) will help. Using the note circle alongside will also give you more of what you need to decipher this. 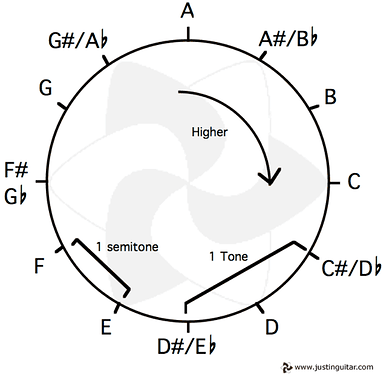 I do intend writing up my full theory topic. I hope this gives you plenty to work on for the moment.
Cheers.

I listed the 5th fret as #1 in the A major 6ths run you posted. Duh…
So I should be able to figure those notes out.
While I’m trying to figure this 6ths relationship thing out, I’m hoping I can find out where I can make use of bits of them in 12 bar blues progressions. I’m not sure how that placement works without screwing up the groove of the different progressions. It seems they go down the neck and back up for 3 before returning to the progression. That’s the idea anyway. Shrug…