Thoughts on fretboard stickers for learning the fretboard?

These popped up in my feed. I have a cheap strat from China that I want to try them out on. Anyone ever try them?

If you want to decorate your guitar with stickers, then go for it.

Hard NO! You wouldn’t even be able to see them when you’re playing.

just start small and take it in strides.
Focus on the low E and A strings up to the 12th fret with just natural notes (no #/b), no open strings.

These will be really beneficial making E and A shaped bar chords. That’s only 14 notes! not so bad. Spend 5/10 min a day with each string over a few weeks, they will be second nature be fore you know it.

Long ago I used to wonder why the names of the notes were not written on piano / organ keys. I mean, those instruments have so many more playable notes than guitars.

But as other said, take 5-10 minutes a day to memorize key notes on the 5th and 6th string, and in a few weeks time you’ll be fine.

Plus, I wouldn’t really stick anything on the fingerboard.

I’m a no on that, as well. I think you’re better off learning the fretboard without them.

It still seems like it wouldn’t hurt to label them fir a while. Right now I’m counting from the first or the twelfth fret which is pretty cumbersome. I have a $60 guitar from Amazon that I could apply them to. It just seems like it help me learn faster. So far all the comments are no’s but no one really has a reason why.

What exactly are you trying to learn by using these stickers? I don’t see how they will help with Grade 1 lessons, well any lessons. Trying to understand what the deal is.

My reason was you can’t really see them anyway when you’re playing. Just print out a fretboard diagram.

So far all the comments are no’s but no one really has a reason why.

Because you’re going to hurt your back and neck leaning over your
guitar looking at the stickers.

You need to learn the notes so you know where your roots notes are. I though my explanation was clear that the two bottom strings are going to give you the best jump start as that’s where very common chord shapes will start. You have to try, its going to be hard at first, but trust me you will be better off skipping the stickers.
They only time I would say putting stickers on your neck is if you don’t have side markers. those will be your home base to find the 3rd,5th,7th,12th fret. and you would put just a dot on the side of the neck, not the fretboard

Keegan, good advice given. I’d concur with the ‘No stickers’ recommendation.

I am assuming you are new to guitar and following Justin’s path, beginning with Grade 1. I’d suggest not worrying about notes on the neck until Justin introduces that. I’d expect when he introduces power chords (not sure, don’t know the new Grades). Then as suggested by @headsmell focus would be on low E and A strings.

When I gave this some attention (last year in year 5 of my learning), I followed an approach based on learning to play each note on each string on frets 1 to 12, no open notes. When doing that and applying the ‘Practice makes permanent’ principle, I did the exercise with a neck diagram in front of me. I took great care to make sure I played each note correctly. Initially it took nearly all the time allocated to play a note in every position up from the low E to high e and back down to low E. But over time, with just 5-10 minutes at the start of every playing session, it becomes memorised.

When I gave this some attention (last year in year 5 of my learning), I followed an approach based on learning to play each note on each string on frets 1 to 12, no open notes. When doing that and applying the ‘Practice makes permanent’ principle, I did the exercise with a neck diagram in front of me. I took great care to make sure I played each note correctly. Initially it took nearly all the time allocated to play a note in every position up from the low E to high e and back down to low E. But over time, with just 5-10 minutes at the start of every playing session, it becomes memorised.

As the others explained, you wouldn’t see the stickers under your fingers, and leaning down to check your fingers all the time would hurt your posture, too.

Justin’s website already has some fretboard diagrams available. True, they don’t show all 72 fret positions (until the 12th fret), but they will give you a solid foundation if you follow the lessons and don’t rush anything.

Really, just be patient and take your time to memorize the notes. I’m sure you already know the names of the open strings forwards and backwards, so take only 1 step further and tackle the notes at the 3rd fret on the 5th and 6th strings. For the other strings, try to apply the octave shapes as well so you will discover the relationship between the various intervals and the place of the notes on the fretboard for yourself. And the discoveries you make on your own will mean so much more to you, even if they are relatively small things in the greater scheme of guitar playing. Like, at the 7th fret you’ll find the octave of the open fret above (vertically). That’s another 6 positions where you know which note is.

So yeah, just be patient and put in the practice time to get familiar with the fingerboard.

As others have said it’s a firm no an for no other reason than it’s a waste of money. As others have said the key notes to learn are on Strings 5 & 6 as these will be used when you start to learn barre and powerchords. String 6 is particularly important as this gives you the starting root notes for your scales as well. If you know String 5 and 6 (and String 1 is identical to String 6) then you’ll know enough for years as a beginner.

I support the “no” votes.

If you are still learning then you may still be watching your fretting hand most of the time, but even when you do this, you shouldn’t be leaning over far enough that you would see these stickers.

So they are either useless, or they are encouraging you to adopt a a very awkward position in order to see them.

If you are still at this point in your learning, then learning CAGED shapes and the associated chords and scales, and understanding intervals is probably more useful than trying to understand and memorise note names.

If you are past this point and are able to confidently fret chords and notes without constantly watching your fretting then these stickers would be even more useless.

So, at best I think they are useless gimmick. At worst I suspect they are a crutch which will encourage bad habits and impede your learning.

While the discussion continues find somewhere handy for this, you can do the flats n sharps 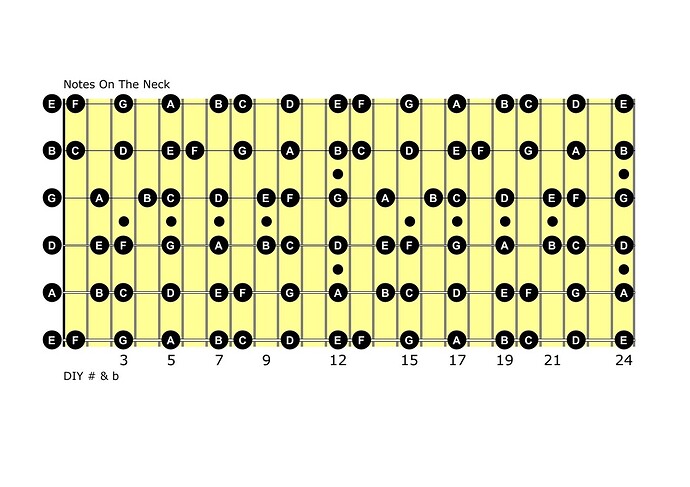 And its a NO from me btw.

So far all the comments are no’s but no one really has a reason why.

I hope you’ve been given enough reasons by now, but it’s your money and your guitar so if you really feel it could help, then your choice.

gimmicks like this have been available for at least the last 30 years and have never taken off. Why? Because they are impractical and no substitute for slow methodical brain training.

I am still struggling to learn the notes but those I do know are now stuck there due to perseverence. I honestly believe that this would not help you one bit and apart from a bad back and eye strain I feel it will hamper your overall progress by reducing your cognitive skills to work things out for yourself.

To expand on my earlier “no:”

I think you’re better off using the frets and fretboard inlays/dots as your visual reference. Frets are going to always be present, and most guitars will have dots/inlays in standard positions (unless you have a classical guitar). If you get used to using stickers as a visual reference I suspect that when you remove them your “fretboard visual reference” will have changed, throwing you off.

To be on the other side of the vote.
Putting the stickers on would in it’s self help you learn where
the notes on the neck.

So maybe spend a few days putting
the stickers on, then taking them off rinse/repeat
But if you don’t know the notes on the neck you could get it
wrong and that would be a bad thing