I think you are approaching the song too “one dimensional”, too much in a sequence
you say you try to remember it “bar by bar”…

When I learn a song; I work my way up from the bottom, in layers

first I see that I get the main structure…
A chorus or verse less wouldn’t harm the song but the basic structure is the basics.

Upon that base, Itry to figure out the chords for each block; so if I feel like changing the order of the green “structure” blocks; I still know what chords to play when.

If you get which chords go in which block; you can rearrange the main structure as you please. note that I don’t play the lead lines yet; I just work through the chords. If I don’t feel like learnign the solo; I can improvise my own picking over the chords. I KNOW the chords for the solo so I will never be lost…

You can play a whole song and don’t even have to memorize any leads yet. A song won’t fail if you let out a solo and improvise something. It WILL fail if you stumble upon things you can not do yet. the level below is always the failsafe. Feel comfortable to drop to it when necessary; peopel won’t even notice…

Then I work myself up some more and try to figure out (or create my own) picking patterns and lead lines. If I forget or decide to play them in a certain fashion; I can always drop down a level for that block… as I know the chords. don’t be afraid to simplify strumming patterns. As long as the main rhythm is right, don’t focus on copy’ing strumming patterns or pickign patterns to much. Keep the flow steady and as long as that works, you make it as complex or basic as you want

When you’re able to do this, You can play your song through and you make it sound quite “real” already.

Play these songs a lot of course; and play many different songs.
It’s beter to know 5 songs in a basic structure than 1 for 60% and then just stop playing in the middle of the solo. Play a lot; play many songs, reprise what needs attention. The sogns will be pretty basic in the beginning but on day 3 or 4 you will be adding layers to your first songs while you learn some extra, new songs on the basic level that day.

As days progress, you play a number of songs but every day you add some things to it. Like the “decorations” layer. You feel confident in the song, you can fall back to a lower level if necessary but if it goes well; add another level by adding those decorations; some nifty picking; some rhythm double-timing, some harmonics, etc.

my repertoire is the product of this layered method. Some songs have parts that go “high” in this layering but keep some verses or choruses very basic.

Here’s another tip: If you freed yourself from dogma that covers need to be copies of the song; learn to improvise over chords.

If you learn to apply some randomness over chords you use a lot; you can re-use these tricks in many songs. That’s why learning chord variations make you sound less boring. The particular choice of playing chord variations (or only parts of chords) makes you develop your own style of “covering songs” some more. when I see a Dmajor chord I seldom play “just” a Dmaj…I play parts of it, I play Dsus2, Dsus4 strum, pick, play a lick that fits the chords…

rats; I could go on like this…perhaps I should write a little guide: “making songs your own”

Mastering several songs at once

sure, why not… I never focus on mastering a complete song at once

perhaps you can find some inspiration out of my personal method. I don’t claim it to be “THE way to go” but it has got me this far…I take up serval songs at once because I work through the horizontal layers and not the note-for-note timeline.

work up in layers:

I sometimes learn a little solo quite early, but the moment of learning it depends on the difficulty, length and appeal… some solo’s you just want to try out right away

if you do serveral songs at once (but not too much, about 2 to 5) it doesn’t really matter in what phase you are.

Because you learn the structure of one song, you’re doing the solo’s of another and already “applying eternal layers of finish” on a song you quite mastered, you never get bored.

I try to employ the “pareto rule”; achieve 80% of the result with 20% of the total effort.
find out which basics things bring you the most result and give a lower priority to all that 80% effort to achieve that quality increase of 20%… becasue in the meantime you have a good song quite fast, and you have all the time afterwards to perfect it.
this means, in a whole, more result in less time.

I once started to learn “tears in heaven” note for note.
It was before I knew this site and and wondered how it was possible to do all these notes at once etc. I learned some chords thanks to J’s video’s and I figured out that a lot of the notes were arpeggiated notes in a chord.
I learned a basic version years ago and about 2 years ago; I started to fill it in more.
It was only yesterday that I learned some extra fills and a less boring version of that birdge-kinda-thing near the end of the song.

So I knew a good amount of the song but I took some time later to make it better because I couldn’t do it back then.
(my technique wasn’t as fluent). but in the meantime, I had a song that was still “good enough”.
I will be playing it for my family again next weekend (annueal fmaily weekend), as I did last year, but better.
of course; I also have some new tunes in my repertoire and they will get a upgraded version of my “sultans of swing” too.

LievenDV Thank you this was wonderful! advice and tips!

I’m getting a lot of value out of making my own lead sheets. I copy the best one I can find online into my word processor, and label each section (verse, chorus, bridge, etc) in bold…this gives me the basic structure.

If necessary, I’ll do further edits, usually to get the chord change timing and vocal phrasing exactly right, since this is something I struggle with.

Then I practice while looking at the lead sheet for a while…this really helps me to “practice perfectly”.

Then, practice without the lead sheet to commit it to memory. 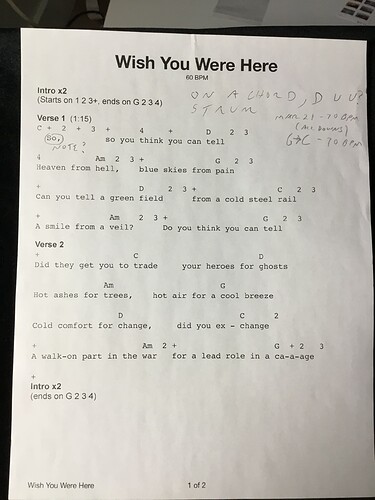 This is wonderful advice. I’m still new at this and need lots of work on strumming and playing in time. I have about 10 songs or so I run through to practice. Is that too many at a level 2 learner? I find that playing the same song over and over can cause me to lose interest. So I rotate to something new to challenge myself. I still have lots to learn- you are a wealth of knowledge. Duizand Dank:)

Don’t worry,
If you need variation to stay fresh, try it.
As long as you don’t regress and still make progress, it will facilitate different chord changes etc.
If you notice progress is going slow or you start forgetting stuff, cut back on the number of songs.

Actually, you are in the right spot to set a “10 song goal”.
learn all about building repertoire and check goal #3!