What’s in a name?
Twin Six is what I’ve named by 12-string, after a '32 Packard Dietrich owned by my late grandfather. Packard designated its 12-cylinder cars Twin Six (until '33, when they changed to Twelve).

The Twin Six is an Alvarez Yairi DY-76 from 1986. I also have a matching six-string Alvarez Yairi DY-39 from 1989. Both are Sitka Spruce top with Rosewood back & sides. Though I consider myself an acoustic guitarist, I also have a Squier Bullet Telecaster and Vox Valvetronix VT20X amp gifted to me by my brother, who’s a drummer.

String Theory.
Having experimented with different strings on both 12- and 6-string, I’ve found distinct differences among various makes & gauges of strings. I started with Martin SP 80/20 simply because that’s what the local store sold me. I ended up with an 11-string guitar because the G string snapped. Revisiting Martin strings, I have now snapped enough strings to have ruined three complete sets, two for 12-string and one for 6-string.

Fortunately, I’ve had better luck with DR, GHS, Ernie Ball, Rotosound, and D’Addario strings. I have yet to snap a single string from any of these makers. DR Sunbeams & Rotosound Jumbo Kings for 6-string and DR Rare Bronze & GHS Vintage Bronze for 12-string represent the best value for money in terms of resonance, ease of play, & longevity. Most recently, I’ve tried D’Addario Nickel Bronze for 6-string, which cost twice as much as other bronze strings. I’m skeptical of their claim that they bring out your guitar’s natural voice. Sure, it looks cool to have all silver strings, but in the final analysis, they’re just strings.

Take your pick.
I had a hard time learning to get along with picks, but thanks to Justin’s “Side of the thumb!” lesson about holding a pick and lots of practice with the metronome, I’ve acquired a collection of picks. I have all the Dunlop Tortex triangle picks, and have worn the logo off the yellow one. I’ve also worn the writing off the Dunlop Celluloid M, H, & XH. The XH is definitely my favorite. The Dunlop Primetone 1.0mm has a positive grip and crisp attack. The D’Andrea Ultra Plecs (1.5mm & 2.0mm) have a certain magic playability, while the D’Andrea Pro Plec 1.5mm has a mellower attack that makes quiet playing easy.

Repertoire.
Pink Floyd: Wish You Were Here on 12-string is coming along after lots of practice.
Velvet Underground/Lou Reed: Sweet Jane and Heroin
Beatles: I Am the Walrus and Eleanor Rigby
Frank Zappa: Go Cry on Somebody Else’s Shoulder and Dumb All Over (power chord exercise)
Tom Waits: Chocolate Jesus
House of the Rising Sun fingerstyle
Deep Purple: Smoke on the Water (obligatory on electric)

Every time I’ve contemplated starting this, I’ve picked up the guitar to practice instead of writing.
At some point, I’ll pluck up the courage to record, though I’ve only got a webcam that will leave a lot to be desired in terms of sound quality.

Good to hear from you again, Jonathan. Glad to hear all is going well. Would love to hear some of the less frequently played songs on your repertoire.

And if you get to wanting to record and have a mobile phone you may find that is a better option. I have found that the video recorder of my phone, which while not old is not an upmarket brand or model, does an acceptable job, better than the audio recorder apps on the phone.

The mobile phone is my wife’s domain, so I have limited access. The webcam is always available, and would be better than nothing. Eventually, I may invest in a decent microphone setup, and plan to ask the local music shop for advice.

Photos of my guitars. The matched Alvarez Yairi dreadnoughts. 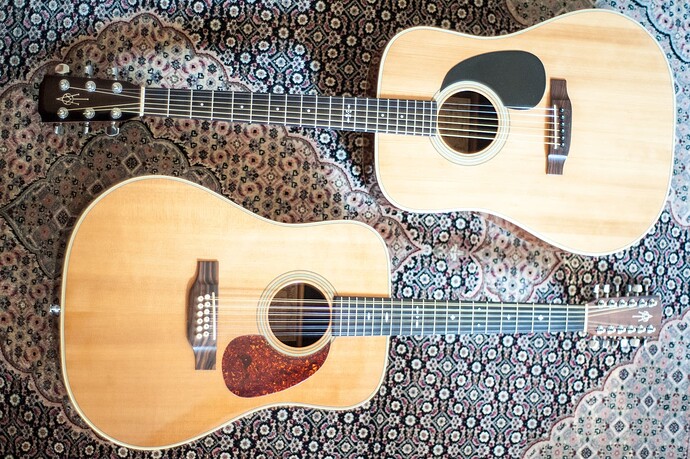 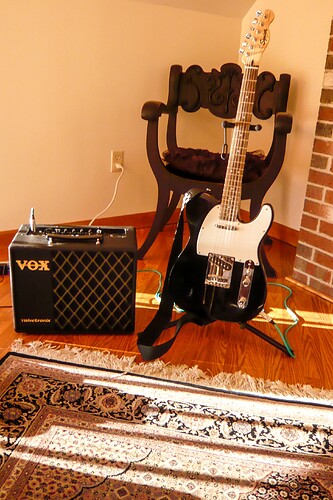 Hi Jonathan,
You did well…play the guitar first and write later

…the right priority due to lack of time,
Have fun with everything

Thanks for sharing the pictures, Jonathan. I especially liked the pick-guard on the 12 string.

Thanks, Rogier. Play first and write later, because writing properly takes a lot of time, especially on occasions when my keyboard goes wonky.

They sound as good as they look. One thing I love is the AY logo inlaid in abalone, which remains unchanged in their current guitars.

They sound as good as they look.

Indeed. I remember you posted a recording of Happy Birthday finger-style. Would love to hear more

Yes, here’s the video, shot with my webcam, so the sound quality leaves something to be desired, but it’s better than nothing. 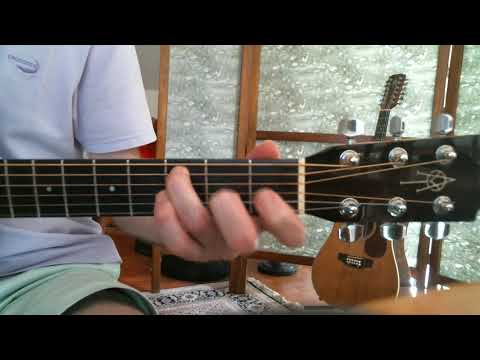 In other news, I’ve made a breakthrough in practice on the 12-string. Alternate picking of both strings of each course has proven quite a frustrating challenge. The other day, I managed successfully to pick the beginner finger-stretching exercise alternately with almost complete accuracy. This success has encouraged me to practice it more, and this is how we progress; we work through frustration until we experience an initial success, which drives us to keep practicing.