What is your first, last and next concert? 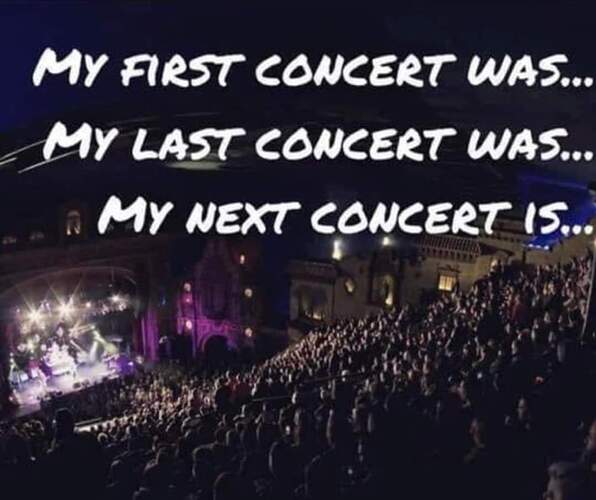 Nice tread Adrian
First: los chikos del maíz (a rap/political Spanish band)
Last: Eagles of death metal (and the day before that The Dead South!)
Next: Arctic Monkeys in September

Next
It was suplosed to be Fairport Convention May 2022 but we have cancelled our tickets.
No next pending.

@adi_mrok
RHCP first and next!!

And almost equal 15 years between those, my God how time flies! I promise I haven’t planned this, mr Frusciante is to be blamed

It was but Shinedown played way too short IMO, fortunately saw them live on a separate occasion as headliners

First: The Beatles, 1967 - I was working at a Club they played at!
Last: very good EC tribute @ the Artrix Bromsgrove 2019 I think

First conceet was in '72 at the University of Tennessee when Elton John was a young thing and so was I. $7 ticket for seventh row, center.
Last concert was Gary Clark Jr at the Ryman in Nashville.
Next will be Bonnie Raitt with Lucinda Williams this month!