So here it is, freshly recorded: [(COVER) Pink Floyd - Is There Anybody Out There? - 2022-02-13] Apologies for the volume being a bit low, I tried to adjust it in OBS as much as I could. I may give the song another try, but I don’t think I’ll be able to play it any better on camera today. Your comments are welcome

Bravo and well played, Jozsef. I can make no comment on the actually performance of the piece, all sounded good to me and I don’t know it well enough to comment on the timing.

I pushed up the playback level in my YT, which I normally have pulled down on my LT to about 50%, and then background hiss on the recording became more obvious.

My only thought on that is to check the gain on your interface as recording. Not sure what you would have been seeing on the halos around the gain knob (you have a 4i4 as I recall). Given the song was a pretty consistent level you could push the gain up until the halo is steady green, perhaps the odd orange peak (but no red flashes) and that would improve the signal:noise ratio.

You can adjust the input gain on OBS as well, using the slider on each track’s audio meter but if you boosted there then you’d boost both signal and noise.

As it is, it sounded pretty good, so no apologies needed. Well done!

Actually, the gain on the 4i4 is almost at the top and it was mostly in the green. I tried to place the mic as close as I could without it getting in the way or me bumping into it. In OBS, I increased the volume level to about 175%. True, I played with as much force as I usually do on the acoustic, maybe a bit more powerful picking would have been good.

I sure have a lot to learn as it’s been barely a week that I got the mic and the 4i4.

Could you please translate this to plain English for me?

Could you please translate this to plain English for me?

The image below is a screenshot of your video playing in YT. The box in the top left is what they call ‘Stats for nerds’. You can display this when playing any video in YT by placing the mouse over the video, right-click the mouse, and select ‘Stats for nerds’ which is the last of the pop-up menu options.

You will see a row ‘Volume / Normalised’ which shows two percentages and a content loudness value in decibels. On the screen shot you’ll see both percentages are the same. The first indicates that I was listening at 35% volume (I had it more turned down than I said on my YT playback volume slider). The Normalised percentage is the same as the Volume because the loudness level of your video is below the YT normative level, by 12.8dB.

If you produce a video that is louder than the YT norm then that value reflects as a positive number. Then YT turn down (not exactly sure how) your audio. And the Normalized percentage would be lower ie if I was playing at max playback then the percentages might read 100% / 85% with a positive content loudness.

In your case you could raise the overall loudness of the final video to get closer to the norm. I generally tinker with recording setup to try and get a content loudness value between -3dB to -1dB. 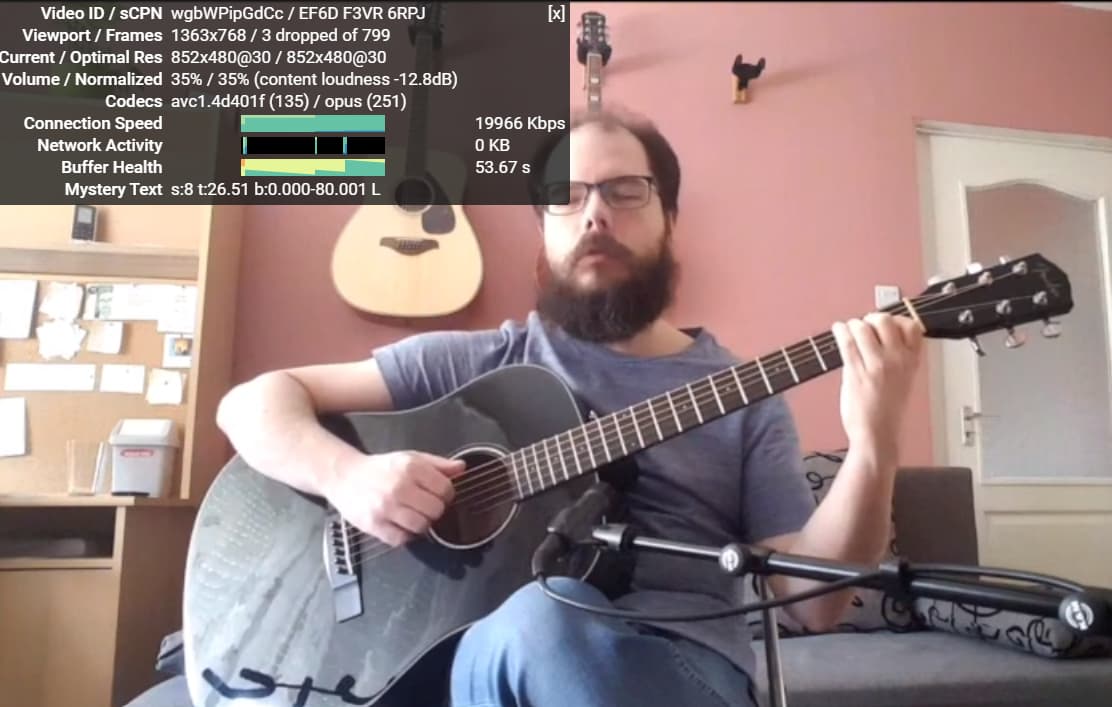 Actually, the gain on the 4i4 is almost at the top

When you say ‘almost at the top’, imagining a clock face, do you mean pointing up to 12 o’clock or do you mean turned clockwise almost as far as it can go?

Another thing you could look at is the use of filters on the OBS channel. I think, not at my PC so can’t check and screen shot, that there is a limiter plugin that you can add. You could use that to boost the loudness and prevent digital clipping (level going over 0dB).

But all that said, I never found the level to be an issue. The audio quality as I listened to it was just fine.

Thanks for the explanation, @DavidP When I said “almost at the top”, I mean “almost as far as it can go”.

Yes, OBS seems to be a useful app, so I’ll keep on tinkering with the adjustments.

When I said “almost at the top”, I mean “almost as far as it can go”

May be helpful to make some audio only recordings in a DAW (Digital Audio Workstation) and check the levels you are getting. With the gain on the interface turned almost all the way up I would expect you to get a strong signal, even when finger-picking.

Actually, that’s what I did when I first tried out the mic, and the volume was quite OK in Audacity and Reaper (depending on the gain level and the distance between the guitar and the mic).

I’ll continue experimenting with the various setup and see what works best. Thanks a lot for your advice so far.

Great. Have you watched this video about recording levels, may find it useful.