Hi All
A while back I started a thread about the Trio+ on the old forum site. There’s a lot of good info there and it would be a pity to lose it as the Trio+ is still a current pedal.

@Richard_close2u is it worth transferring the thread over to the new Community site?

Hello Gordon,
In my search for recording stuff, I happened to come across this topic… I got such a trio band creator + looper in September,…and I am not using more than half of the capacity.
I’ll get on with it ,a bit better now, thanks for the remainder.
Greetings , Rogier

Hi Gordon,
I think it’s well worth starting a Trio+ topic here in the community. If you’re feeling altruistic you will copy, edit out all the rubbish and paste the relevant Q&As in one batch, similar to what Richard has done with a load of threads so far.
The Trio+ is my backing band, after all

Speaking of which, Santa ‘severed my umbilicus’ by giving me the Line6 Relay G10TII, which doesn’t need a receiver as it’s compatible with my Yamaha amp.
I can now pick up my guitar and little amp and sit out in the garden, annoying the neighbours without cables or power supply 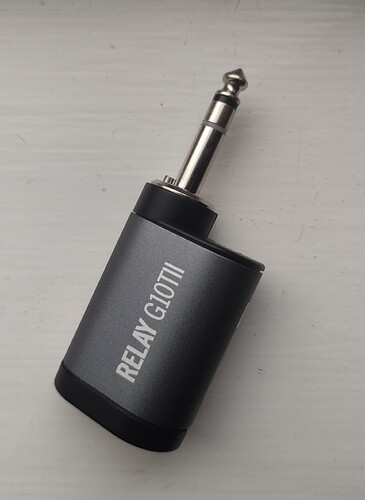 @sairfingers
It would be awesome if you moved it over Gordon. I got one some months back, because a deal came up and I knew I would get one eventually.

But I am not quite ready to utilize it much, yet. It will be helpful to have your experience at my disposal once I am!

Well Brian, @brianlarsen sitting in the garden with guitar and amp is your first step towards a stadium gig!

With regards to transferring, (I realise the buzz word is migrating, which I thought only birds and animals did in winter), the thread to the new site would I have to cut and paste every post that I think is good. It runs to 3 pages! You say to do it in one batch. How do I do that?

I’m reluctant to say yes and set a precedent for requests for dozens of other topics to be migrated on recommendations for guitars, amps, accessories, fx etc. There are thousands of interweb references that can be found for any gear you could name. Plus new advice conversations will naturally spring up and grow in this community organically.

In terms of migrating topics …
Justin wanted a clean start with some allowances. I am migrating topics in which people have a stake as they were rooted in and around community involvement. Others are migrating their personal collected archives. I will be too when I have completed the community based topics.

If you could take up the idea of selecting the useful and still relevant comments and weeding out other, then migrate the essence and useful in a single condensed post as a reference to set this topic rolling that would be fine. From there, conversation within this topic would / could grow organically.

I have been copy / pasting / editing in to a Word document first. Once completed, I then ‘migrate’ to here.

Ok Richard. I take your point about setting a precedent as of course there are loads of excellent and informative topics/posts on the old forum.

The link to the Trio+ topic on the old site will presumably work for a few months and new questions can be asked and replied to afresh on this topic here.

The Trio+ is what my current GAS affliction is pulling me towards. I decided that when I learn a particular song, rhythm and lead both, then I’m going to go ahead and get it. Februaryish I hope. So I’m bookmarking this thread for now, for learning not contributing.

Richard @Richard_close2u is absolutely correct. There are loads of ‘how to’ videos on the internet about the Trio+ pedal.
However there was one issue that I could not resolve and couldn’t find an answer to.
Until!
Some PM conversation with Brian @brianlarsen solved the problem. I’ve copied the subsequent post across from the ‘old forum’.

A big shout out to Brian (brianlarsen) who came up with the solution to a problem I had when using the Trio+ with my Katana50 amp.
The K50 has no fx loop, therefore any fx you use on the amp is also added to any loop/drum/bass you create with the Trio and then use as a backing track to play over. Drums with delay/reverb etc do not sound good.

Up until now I’ve been using the amp on a clean setting as I used the Trio to create backing tracks that I played over with my acoustic so this was not an issue.
I’ve recently been working on improvisation with my electric and creating backing tracks to play over. This lack of fx loop and the subsequent blanket fx over everything was now an issue.

Enter Brian’s solution. Connect a double male cable from the headphone out socket of the Trio+ to the Aux in socket on the amp. Bingo. The amp plays the Trio loop/backing track clean and you can then separately put whatever fx you want on the amp for the guitar. Elegantly simple! This should work with any non fx loop amp with an aux in socket.

Well done Brian and thanks again.

Hi @sairfingers I’ve been thinking of getting a looper sometime in the future for some fun and there are a few gerry cinnamon covers I’d like to do. How are you finding the Trio Plus and do you know how it compares to the likes of a boss Rc-500? Do you use the Trio as a band in the box or as a looper? Also when do you think it would be best to include a looper in my learning stage? Intermediate level?

@Socio
Hi James. I have no idea how the Trio+ compares to the Boss rc500.

I think the Trio+ is a great pedal and I use it to create backing drum/bass tracks and as a looper. It has a bit of a learning curve but after a short time it’s pretty straight forward to use. It is fairly expensive however.

A looper is the one pedal that everyone (including Justin) recommends and is something you can benefit from after you’ve got a few chords under your belt as that’s all you need to create a loop. A looper only pedal, eg a Ditto, would be a much cheaper option if you only want a looper.

It’s difficult to compare the two. I think the RC500 is the latest incarnation of Boss loop stations… as far as I can see it’s allows two loops, some on board effects and then sets of pre-defined rhythm loops (A/B samples) from 16 drum kits. Certainly more flexible than it has been in previous incarnations…I think it can also determine the tempo from your playing. It’ll undoubtedly be good given it’s Boss.

The Trio (band in a box) originally created as a practice tool that provided drums and BASS guitar backing based on what you played. You arm it and play it a chord progression and then it will automatically select an appropriate drum and bass pattern based on what you are playing. The Trio+ bolted on to the original Trio a looper as well. Once the original “backing track” has been generated you can select from different styles, different types of beat until you find something that suits you. You can build complete songs with up to 5 parts ordering and looping each as you’d like. You can use the looper with the backing track or indeed entirely on it’s own.

So I would say one is more looper focused (the Boss) and the other is more backing track focussed (the Trio). Quite a big difference in price probably reflecting the age of the Trio+ now compared to the RC500. The Trio+ is quite unique as pedals go.

Been meaning to drop in here for a while. Thanks for starting this Gordon @sairfingers .

I have had a JamMan looper for some time now and always struggled to get on with it and the tempo accompaniment is pretty basic - my 20+ yr old Zoom GFX707 has a better rhythm selection. Anyway I finally got to watch the Anderton’s Trio + Band Creator review, after Jason’s post reminded me it was on my to view list. And it certainly ticks a lot of the boxes, especially backing for OMs which is my next direction. Seems you get a lot more functionality compared to the RC500 and its £70 cheaper, even with the FS-3X bundle that Thomann have at the moment. For me 205 euros opposed to 289 euros for the Boss, which to me looks to have just more drum/rhythm options but no bass.
Mmmm need to think about this one.

You definitely need the Fs-3X… and you know I use it all the time for backing both at home and live…I’ll definitely be using it tomorrow. Best pedal I ever bought. I can generally throw together a good backing track in 15-20 mins.

I guess it would work off the Mustang’s FX loop, which would mean no real change to my normal set up. Had originally planned to use the Mustang’s “band” facility and load backing tracks to the amp but the output only goes to the PC speakers/soundcard. There does not seem and easy way to feed that into an AI or DAW for recording or “live” for that matter. You may as well drop a BT into the DAW but then you have this issues with syncing up or putting a long lead intro in front while you bounce around from PC to mic. Stepping on a button to kick things off makes loads more sense. So the Trio sounds a better option.

The biggest benefit for me is that I have a “song” for each real song in our setlist so from a practice perspective I can quickly select the songs, practice and move to the next. Similarly if I’m learning a new song once I’ve got the the chords about right then I’ll create a new backing track quickly on the Trio. I obviously could download something but it actually feels better to be creating my own and takes no time at all…it isn’t necessarily an exact copy of the original but it is my song.

Yes, that element is appealing, rather than trying to squeeze out clones !

The other thing to bear in mind is that a number of members in the Community have the Trio+ and I have not yet heard of anyone being disappointed in it, even those of us who don’t use it half as much as we would like to or feel we should. It’s a great bit of versatile kit and probably as close as you’ll ever get to having a jam-buddy that’s not a real person. If you have the dosh, it’s a yes.
Check for 2nd hand as it either works or doesn’t but new is not better with this. And you definitely should get the footswitch

Thanks for the pointer to the deal on Thomman. It’s mental that they have the same combo pack on PMT, GAK etc for an extra £100+. For £180 the Trio Plus and Pedal seems like a no brainer. Would something like this be suitable for someone at my stage start of BC2 or best for later on when I’m further along my guitar journey? I think the only benefits I can see from the Boss RC-500 is its battery powered and more drum/rhythm options.