Do guitar picks wear out or do they just grow old gracefully or more likely you loose it.

Obviously it depends on use but is there any guidance on when it should be changed as a beginner it would be helpful to know.

I guess mileage varies based on the player and pick, but I have some that I’ve been using for years. That said I probably have 3-5 that are “floating” around where I’m setup so they all get used at some point.

Interesting question. Been playing for 10 years and never had a pick wear out. It must be possible. My advice is don’t worry about it as a beginner. If it does wear out, you’ll know it.

I guess they would have to at some point, right? How long would it take to wear one out? Maybe worn down would be most likely? How would I even know if a pick is worn out? I used to play with the rounded edge of a regular pick until I stated using the tortex triangles for rhythm and Jazz III picks for lead. I would probably be ok with a worn down pick. Good luck with your search, it’s just not something I would ever think about to be honest.

I think it depends how much you play it and how you play it. When I was playing and learning two songs one after another (so we are talking months here) this is how my Tortex orange changed, you can see that the edge slighltly worn out and there is a bit less material. But my green Tortex which I use heavily nowadays seems to be intact. Two same picks near each other, check the pointy tip of each pick on photo one, I also put one on top of another to show the difference.

It happened to my .46 mm Tortex pick, but it didn’t affect the usability.

I have a gorgeous wooden thick pick I use for most of my lead playing and it’s certainly wearing, don’t know if it’ll actually wear out tho 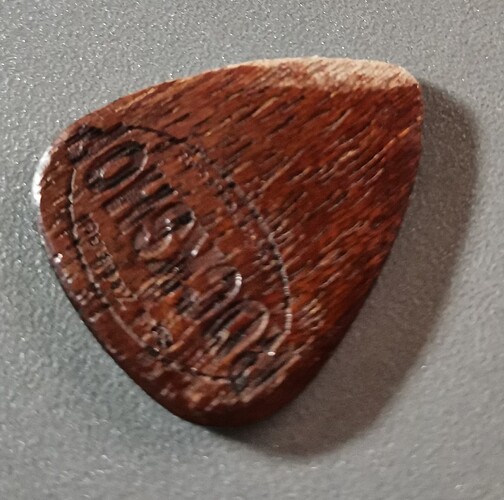 They do wear out but a lot depends on thickness, material, style and attack.
You’ll feel it when you need to change

A guitarist friend of mine who plays hard and loud wears his picks down to almost nothing. As they lose their tip, he ‘sharpens’ them by running the edge through the carpet.

Yeah i have wore out the plastic ones they usually break and the red dunlops like above, they wear out eventually. I like my flimsy .48mm picks they last forever.

Thank you all for your input and as you expect it does come down to personal choice unless you break.

What prompted me to raise it was that I was practicing strumming on Sunday with a Jim Dunlop nylon 0.38 and it sound very “clacky” in comparison to normal. Compared it against a new one and there was a very slight amount of wear if you looked very closely.

On reflection I am going to put it down to Operator Error.

Uh, I did this over this past weekend…I might have been a bit too “exuberant” with it. 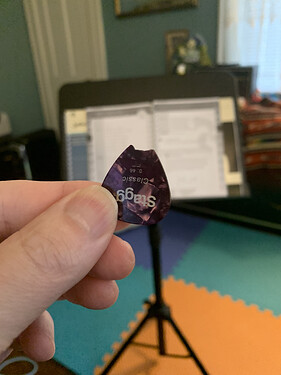 I think I might call that a structural failure rather fair wear and tear.

Yep, but I’ll note that I continued playing through the song, lol (didn’t know it broke, only that something had changed).

My local guitar shop gave me a handful of free picks and that one turned out to be one of my favorites. Went back to a well-worn Dunlop of the same thickness.

I started noticing a weird scratchy sound coming from mine then compared a new one and found it looked exactly like this to slightly more rounded. (Added pic for reference)
For me the sides wear at an angle and probably that’s why they start sounding like crap… with 3-4hrs everyday mine look and sound like this after around 3 weeks… and yes my technique might just be off

… I am just 3 months into my learning. 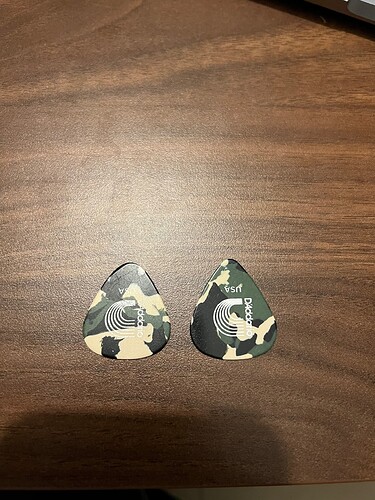 @SloppyChords We seem to be at about the same point in our journey and would like to think that as we get better we become more conscious and critical of what we are hearing. It would be nice if that was case but not sure in my case.
This has actually made me think about trying thicker picks and had a go at Tortex 0.6 which to my surprise didn’t sound to bad.

I have pretty much given up on picks, but now I am afraid for my fingernails!

At least I don’t chew on them like @Burnspot, and they grow back…

I did move to a thicker pick really quickly. The ones pictured are 0.7mm and feel just right.
We indeed get more critical of what we are hearing. I look back at my initial recordings and can hear and see many differences now along with a lot better rhythm! Btw do record yourself whenever you can… can’t recommend it enough. It can become a motivator in itself when you look at how far you have come.

@SloppyChords Funny you should mention recording I did thar for the first time today, some simple chords for Brown Eyed Girl didn’t sound too bad but did not quite get a couple of chord changes quite right but I was using The old faithful strumming pattern.
Also recorded singing along to Dance the Night Away on the App with just the backing track no vocals that wasn’t very good if I am honest. Just a month into singing lessons as knew I wouldn’t be able to sing without some face to face help.