My song upload for the week! This is pretty rough, but I’m going to post it anyway as I want to practice some other stuff tomorrow.

This one was very challenging to learn. Non diatonic, lots of chord changes, lots of choices of where to play on the neck. Every book, tab, video lesson, etc. seems to play it differently. So it’s a mystery to everyone I guess!

I had to rely on my ears and what sounded good. Ended up with all major and minor chords – no diminished or m7 chords like some books and lessons suggest. Probably not playing it correctly lol but it seems to work okay when I play along with the record.

Learned the solo as well, and tried to play it in there without backing. That’s one of the many rough parts.

But the good news is that I can play it all the way through! So I can keep polishing it over time. Here it is… Well done Joe, I enjoyed listening. Beyond my level of playing ability, but it looks quite difficult to play, and you looked relaxed and composed throughout. Thanks

As you said, Joe, feels a lot more ‘work in progress’ than some of your other songs did.

Really beyond my ability to make helpful comments on the chord choices and voicings, the melody of the song. I’m not a Beatles lover and while I know (and like) this song I wouldn’t trust how the original is sounding in my memory.

I most liked the triad portion, that sounded spot on in my mind, as did the solo, perhaps some tweaks needed in some of the other parts? Anyhow, overall I enjoyed the listen.

It’s a wonderful song so I think a good choice for the repertoire and worth continuing to work at it.

You played it well and made a good attempt at singing it but I think you were stretching your voice too much which became more obvious in the higher notes.
All in all I think that you’ve made a decent attempt at a difficult song.

Nicely done Joe. Yes, a work in progress though almost there. I echo the comment about taking it down a notch or two for your voice.

no diminished or m7 chords

That’s what you think! haha

@TheMadman_tobyjenner here’s another example of that chord you wondered about a few days ago.

The first four parts of the intro are:

Hello Joe,
Just listened in, you’ve put the song on the map, still needs some work to get the easygoing groove going

. You’re doing fine with all the grips, it just needs practice to make it ‘flowing’.
I also liked it that you sing. Singing is for me personally, another goal I’ve set myself, as I find it not easy to combine singing and playing together. Therefore, I joined a pop choir last year, which allows me to develop my voice (and it’s fun too to sing with other people). I’m not ready yet to post something myself here, but you gave me some inspiration to jump too … hopefully sooner than later

Michelle has always been a favourite of mine Joe and I enjoyed your version. I’ve got the ‘Little Black Beatles Songbook’ and I’ve just looked it up.
I couldn’t attempt the song playing the chords it shows. 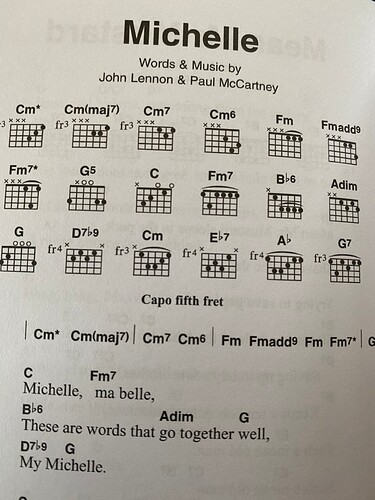 My my there are so many chords in a single song! Really impressed you got that far in a week, jumping around all the fretboard bravo! Some more work and you will nail it

Thank you. Easy to play the parts individually within a band probably. But trying to do it all at once was hard.

Yep, definitely going to keep working on this one. Still unsure about a lot of the chords. Going to ask some pros about them when I see them.

I don’t think those intro chords are correct. I just sent my teacher a message asking about. I’ll post back once I hear.

First chord is F minor triad in the root position (A shape). The only thing that changes on the next is the base note – becomes an E. So I don’t believe it can be a minor major 7 chord.

Then it goes down to the Ab triad (D shape). Then the fifth gets flatted a semi tone and a full tone until it lands on the Bb minor triad with the little riff.

Definitely post. Once the camera starts rolling, it shows where you’re really at. It’s a brutal dose of honesty at times.

I couldn’t even play this all the way through last week.

I probably need to slow it down for practice. And the actual song is slower than I played it in this video. So I didn’t do myself any favors.

I have that same book and reference it all the time for Beatles songs. I don’t believe those chords are right. I tried playing a few of them with the song and many seem to clash.

In one of my private lessons with Justin way back when, we worked on a Beatles tune. I don’t know if it was from this book, or another one. But he told me sometimes musicians who aren’t necessarily guitarists are hired to do the transcriptions. So they might hear a trumpet in the background and the overall sound is m7, or diminished, or whatever But the guitar is just playing a regular major chord. And that’s why the chord charts are all messed up too. Because the person making them just references the fretboard, not really realizing what’s best to play for a guitarist.

This one was a guitar workout. I picked it for that reason. I couldn’t even get through the song a few days ago. So I’m happy with the progress so far. I’ll keep working on it.

Joe, I enjoyed that performance. You’re really doing well with your beatles covers. I’ve got the Beatles Complete Edition, which shows a different arrangements. You mention in your post that you had to rely on your ears, well you have a good pair of ears on you as that sounded good to me. Have you watched this video on YouTube Paul McCartney - MICHELLE - HDTV-FullHD - YouTube to see if you can spot those chords you transcribed.

I don’t think those intro chords are correct. I just sent my teacher a message asking about. I’ll post back once I hear.

I am fascinated at the alternatives and will be interested to know what your teacher says on this. I like it that you have asserted differently as it makes me go right back to dissecting and analysing from scratch.
What I posted above is based on my understanding that the intro consists of chord ‘fragments’ derived from these chords. The lowest F root notes are marked in red. The three notes you play at each step are marked in blue. The remaining note of each is in black. 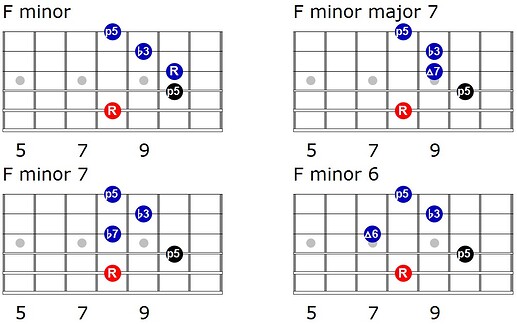 An alternative … If you see and hear the descending bass note of each fragment as the roots then you would have these slightly awkward but credible chords. 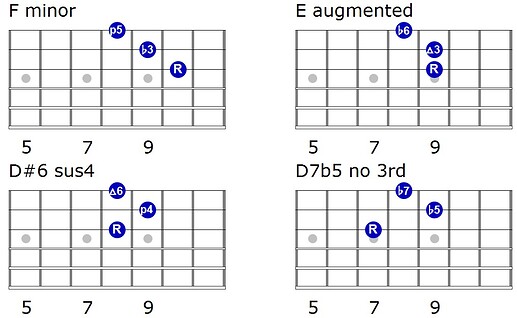 Further alternatives … If you identified the root notes as being any note not on the G string there are other possible names for each of the three chords after the F minor. 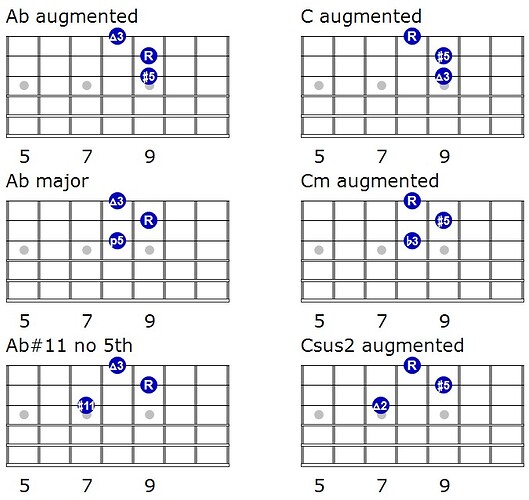 None give me a warm-fuzzy-happy feeling. I think technically, all are good. I would still continue to use the four variants of the F minor I gave in my first comment however.

Well done again, Joe.
I enjoy it even more when folk share work in progress.
If I want to listen to a polished version, sure I can just give the Beatles a spin

I’m following the chord discussion with interest-
not that I understand or can play those chords, but interested anyway

I’ll let you know what she says.

I see what you’re thinking with the diagrams. But why not just go with the notes that are being played since the F root is missing in all but one chord?

So for the D shape starting at 8th fret from lowest to high it would be Eb Ab C – the notes in Ab major triad. It’s a 2nd inversion since root is on the B string. 5th is on the G string. 3rd is on the high E string.

This one was a guitar workout. I picked it for that reason. I couldn’t even get through the song a few days ago.

I’m bug eyed at your dexterity Joe as well as being impressed that you didn’t stop. Just having enough strength in your left hand to do this is a thing. I guess that some of what I’m seeing is the result of years of playing and muscle conditioning.

Thankyou for this, I’m inspired.