Progress report and an inspirational tale

I’ve not been very active on here for the last few months. Towards the end of March I crashed my motorbike and broke my left wrist badly. The bones are healed now, with the aid of a metal plate, but I’ve been left with restricted movement in the wrist, still have a fair bit of pain, and I’ve lost a lot of strength in my left (fretting) hand. In fact , until a couple of weeks ago I was torn between persevering with playing right-handed, starting from scratch left-handed, or giving up guitar and taking piano lessons, as at that point I could only play (slowly) for a few minutes before the pain was too much, and couldn’t fret a power chord or a barre chord to save my life. It was truly the lowest point in my 45 year on-off guitar journey. 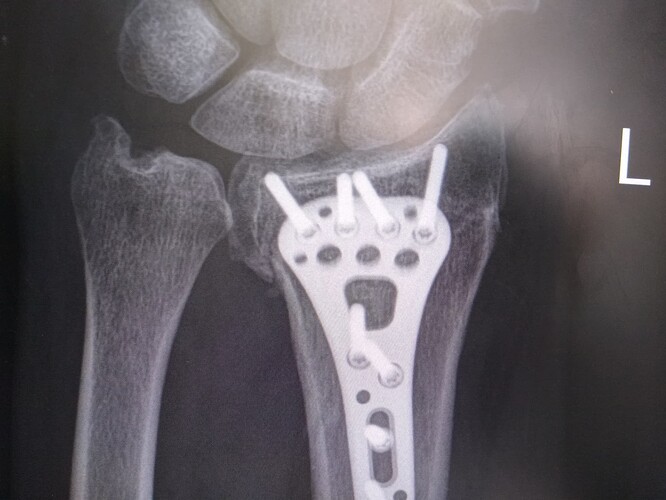 Then I went to a Walter Trout gig. During the introduction to one number, Walter shared his story of suffering from liver disease, and being at death’s doorway before a transplant became available. He had a rocky recovery. He was bedridden for 8 months, suffered brain damage, and by the time he was able to get up and about, had lost the ability to walk, talk, and play the guitar. He learned to walk again, learned to talk again, and then spent a year re-learning guitar, practising for 8 hours a day, 7 days a week. He then went back to gigging by playing the Royal Albert Hall, no less. Three days before the gig that I was at, had been the 7th anniversary of that first post-transplant gig.

Walter was 63 when he had his transplant, 3 years older than I am now. I realised that if he could come back from what he went through at a similar age to me, that my problems are insignificant in comparison, and I was inspired to not give up on guitar, and to persevere with playing right handed.

I’m still only able to play for a few minutes at a time, but that few minutes is getting longer. I’ve found that by playing in a standing position with the neck of the guitar angled severely upward, with the nut at mere or less eye level, the pain is reduced and I actually can make power chords and barre chords, even the dreaded F chord! I’ve got a long way to go yet, the next few months will be full of one minute changes and finger gym exercises to recover the speed, strength, and stretch in my left hand, and I forsee a lot of work to get the pinky back under full control, but thanks to hearing Walter Trout’s inspirational story, I’ve no doubt that I’ll get back to where I was before (end of grade 2 about to start on grade 3) and beyond.

And the icing on the cake? When even holding a guitar was too much, I started learning keyboard, as a backstop in case I ended up giving up the guitar. I’m playing simple melodies just using notes an octave either side of middle C, can play the C scale with either hand at 70 bpm, and I’m really enjoying it, so I’m going to continue learning both guitar and keyboard, whereas if I’d never been injured, I wouldn’t have taken up keyboard

oooh ouch, that sounds nasty, good you are recovering and starting to get back into playing!

Hey, great for you! The best therapy! Glad to hear you are mending and making more of it! Thanks for sharing and being an inspiration for us here!

Hey, good on you, that’s my daily inspirational story in one!!! Rock on.

Huge admiration for you Ian. I’m so glad you’ve found the motivation and inspiration to keep going. You have the mindset of a winner and I applaud you for all you are achieving. I wish you a speedy, comfortable return to full function with the added bonus on another instrument you can play.

Ian, you went through rough times during the last months but kept your head up and saved a positive mindset. You passed a big part of your recovery and you’ll be able to do the rest, I’m pretty sure. Lot’s of positive vibes for you, you’ll make it!

Inspirational Ian! Really great to have you back with us mate, where you belong.

Sounds like there were some dark days there for a while, and looks like some challenges still ahead, but you’re certainly on the upswing now mate.

All the best, and welcome back!
Cheers, Shane

What a tough journey. All the best for a solid road to recovery and a long guitar career ahead of you.

What I like the most in this story is the positivity you express and the sense of joy out of taking up your musical journey again. How far you travel is irrelevant.
The vibrations are strong in this one!

Well done Ian. An inspirational story, stick in there.
I gave up motorbikes 40 odd years ago. Your story reminds me why!

I saw Walter Trout in concert a couple of years ago. Terrific!

Hi Ian,
The news in the Netherlands is here weekly filled with motorcyclists

…
Keep up the music… It is best to continue with the music, it is the most safest as long as you do not regularly hit the guitar body hard in your head when taking off your guitar strap…

That is an amazing story. It makes me want to suck up my arthritis pain and stop whining. 20 years ago I met Rick Allen of Def Leppard. It was amazing to hear how he persevered through losing an arm to playing drums better than many artists with 2 arms. You also have motivated me to keep going at all costs. Thanks for sharing your story!

Wow what a story, both yours and Walter’s!! It’s amazing to have the determination and perseverance you have done Ian, really well done. Wishing you continued progress and healing vibes

Thanks for sharing, Ian, inspirational. Wish you well on the journey and look forward to hearing you play again, keys and guitar.

What a truly remarkable example of determination and as many have said inspirational. Wishing you all the best in both you recovery and your renewed musical journey. Lean on folks here whenever you need support.