What are you currently playing? (Video games)

As an RPG fan I already own most of the titles in your list outright, and the few that I don’t are not of interest to me.

This is the second time I’ve had a free month on game pass and it’s been the same both times. I think the real problem is that there simply isn’t any innovation in the gaming industry anymore. Every mainstream title is a case of been there, done that, got the t-shirt, with developers too scared to try anything truly different, and just regurgitating the same old thing with different visuals attached.

That’s why most of the games I’ve bought over the last few years are from indy devs. They’re not afraid to cater for niche markets or to try new things.

That’s a fair assessment I think. A lot of the games on the service are older for sure. I agree with your sentiment on innovation as whole too. Games are getting more and more expensive to make and in turn that making devs take less and less risks and do more and more games as a service titles with microtransactions.

I would argue though that a service like gamepass can empower devs to do some outside of the box games or games that they wouldn’t normally do if they were shopping their games to publishers. Obsidian is a great example. While Grounded isn’t the type of game I usually play I don’t know if they would be able to sell a game like that to publishers before they were acquired by Microsoft. Another even more out there game that I’m super interested in is Pentiment also by Obsidian. its a historical mystery narrative-driven game set in early 16th century Germany.

I’m personally optimistic about these types of services giving devs new freedom to try new things. It’s in its infancy though so it could go either way.

In my personal opinion, these services will go the way they always do when controlled by large corporations… towards the largest profit. They’re not run by gamers or people that are interested in moving the industry forwards, they’re run by suits and accountants for whom maximising profits and shareholder dividends takes precedence over all.

That’s why we have a thousand and one zombie shooters, survival/crafters, online battle royales, and new F1 / Fifa / Madden / NBA / Whatever games every single year. They’re the easy sells that entertain the undiscerning masses… the same masses that binge reality TV as if it’s somehow entertaining. In fact, that’s a good comparison. The gaming industry is going the same route as TV already has… high quantity, low quality, no “risky” innovation or original ideas.

That’s why indy games do cater to niches and new ideas. They have no publisher, now parent company, and are not under anyone’s heal. They’re small teams running on passion instead of profit, making the kind of games they want to play themselves instead of whatever is guaranteed to sell the most copies. A success for them can be measured in the thousands rather than the millions.

By the way, one thing I noticed about game pass is that their catalogue is mostly made up of games that fall into certain categories. 1) Games that have been out for ages and have already made the majority of their profits. 2) Games that haven’t really sold that well, so have little to lose when offered for a subscription fee. 3) Games that offer micro-transactions or DLCs that are not included in the game pass version. So, not really the great deal it appears to be if you’re an avid gamer.

The simple fact is that whenever a corporation offers you a great deal on something, you can guarantee they’re recouping that lost profit from you elsewhere…

By the way, one thing I noticed about game pass is that their catalogue is mostly made up of games that fall into certain categories. 1) Games that have been out for ages and have already made the majority of their profits. 2) Games that haven’t really sold that well, so have little to lose when offered for a subscription fee. 3) Games that offer micro-transactions or DLCs that are not included in the game pass version. So, not really the great deal it appears to be if you’re an avid gamer.

While I agree with most of your sentiments, here is where I’ll have to respectfully disagree. I’d argue that most of what hit gamepass now are in fact indy titles and day and date indy titles. Take a look at the most recent batch of games coming. Of these title 6 are day and date games, and 5 are made by indy studios. 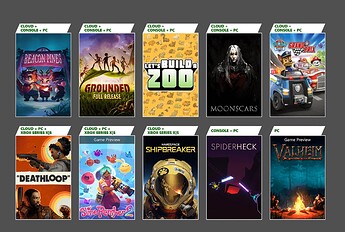 Totally get not liking the service though, it’s not for everyone. I’ll reiterate that I still agree with most of what you’re saying. Albeit, I’m more optimistic about the industry as a whole.

On Gamepass, check out Solasta: Crown of the Magister. Small indy title, based on the Dungeons and Dragons SRD 5.1 ruleset and turn-based. It’s not the prettiest game out there, as far as the characters go, but the gameplay is quite fun.

I’m not sure what point you’re trying to make with that screenie. That indy devs do release on game pass? I never said they didn’t, and every game in that shot also falls nicely into one or more of the three categories I mentioned.

I also didn’t say that all indy games are good, that they are never generic garbage thrown out to make a quick buck, or that they are never under the thumb of a greedy publisher. I said if you want niche, innovation, and games that are made with passion instead of profit, then the indy sector is where you need to look.

Albeit, I’m more optimistic about the industry as a whole.

I can appreciate that. I have no issue with people choosing to be optimistic. However, I’m a realist rather than a dreamer. Having been gaming since the mid-80’s I’ve seen where the industry started, what direction it took, and what it’s become today. It’s just another profit-orientated business, and that’s why it’s so easy to predict it’s future.

On Gamepass, check out Solasta: Crown of the Magister.

Unfortunately my free month has expired, but thanks for the tip. It’s on Steam too so I’ll keep it on my list for when the RPG bug hits.

Point of the screenshot was just to show the newest batch of games coming to the service as you’re clearly not a fan and don’t really look at the catalogue much.

every game in that shot also falls nicely into one or more of the three categories I mentioned.

A couple of them sure, but my friend, most of those games are indy games that haven’t even released yet so they certainly don’t fit into number 1 or 2 and many don’t offer DLC/MTX. So I’m not sure where you are getting this from?

I’m a realist rather than a dreamer

You say realist I say cynic. I’ve been gaming for almost (not quite) as long as you so I’ve seen the trends too. I know that I don’t agree with many of them or even would rather games be more like the games I grew up loving (based on previous conversations it seems we like similar games). But I think what’s really happening here is gaming is evolving and our taste just aren’t keeping up. I have a prediction: I would bet all my guitars that there will be people who grew up in this current generations of games saying the same exact thing we’re saying about the state of the industry today in 20 years but wishing games were more like the games of today.

I cannot be as pessimistic about the industry as you are when games like Pathfinder, wasteland 3 and elden ring released less than 5 years ago. Or when games like Starfield are right around the corner.

All that to say that you are wrong, but so am I and we are both right! We both have seen what’s going on with the industry and just have come to different conclusions.

So currently I am really enjoying Stardew Valley!!! Why didnt i play this earlier LOL.

It’s the type of game you get lost in. I read that it was created by 1 person, that’s crazy.

Oh wow that is crazy!