Blimey that’s a gigantic one, really hard to miss

Well done to programmers though nice to finally have it here! 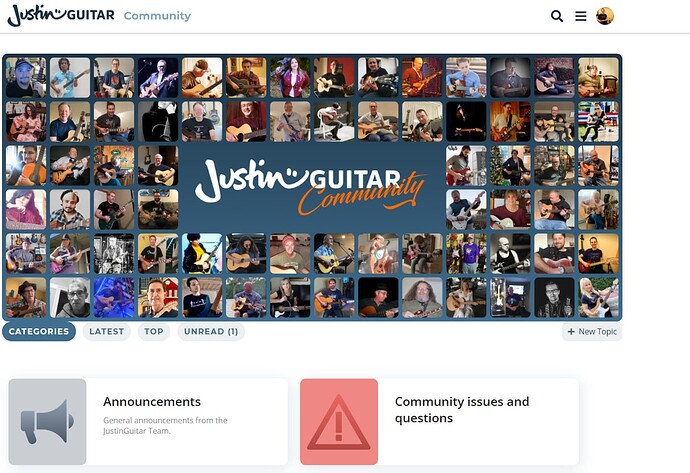 Hey even works on the phone! Noice!

A bunch of fine looking folks and even better looking guitars up there!

Hey even works on the phone

Doesn’t work on my phone. I’ve just got the word Community in fancy red script.

Must be an Apple thing as works on my Android in both mobile and desktop view over the phone.

I usually use an iPad and noticed them earlier today but have just checked my iPhone and I get the pictures, it iOS 15.5

16 posts were merged into an existing topic: Targeted reply problem

Update
The super duper heading has just appeared!! Now, about those targeted replies…….

Must be on the naughty step. Nowts change here, cant see any picture at the Community level using Chrome ! Its just BAU.

When Adrian first posted and earlier today I just got ‘Community’ in the red script, when accessing via Chrome on a laptop. I am guessing this is a caching thing.

Came back now to shift Gordon’s ‘targeted reply’ comments over to the Targeted reply problem topic which he created, and the banner image appeared.

Anybody wanting to see @sairfingers appear Wanted, Dead or Alive (a poster not performing the song) pop over to that this reply Targeted reply problem - #63 by stitch

The banner is cool … but I confess my tally of people for whom I can put a name to the face is pathetically low.

David that was what I was seeing yesterday but the banner appeared sometime today and I have not cleared anything down in chrome.

The banner is cool … but I confess my tally of people for whom I can put a name to the face is pathetically low.

And a few have not been seen here for months.

And a few have not been seen here for months

I guess that is how it goes.

Should I feel aggrieved?

Unless users have their photo as their avatar or have posted a video AVoYP (that includes their head) there is no way of knowing who’s who.
I’ve got 10 out of 72.

I was only joking Gordon. I’m not bothered.